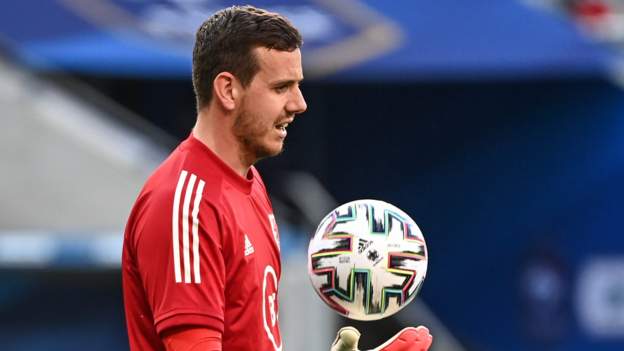 Goalkeeper Danny Ward says Wales players don’t need to be told what’s at stake in their World Cup play-off, because they’re all fans at heart.

The team is in Portugal preparing for the game against Scotland or Ukraine in Cardiff on June 5.

Ward has returned from injury as Wales seek to qualify for a World Cup final for the first time since 1958.

“It’s huge, but as a group we don’t need to discuss its magnitude,” the Leicester City goalkeeper said.

“It’s about the opportunity to get to the World Cup and to put ourselves in this position is great.

“We want to cross the line and give the country something that we haven’t had for so long.

“If we are the group that can do that, everyone will be proud.”

The 28-year-old Ward missed the play-off semi-final victory over Austria while recovering from knee surgery but has already had a memorable end to the season.

Nearly four years after joining Leicester from Liverpool, he made his first Premier League appearance for the Foxes in a 5-1 win over Watford.

Now, having established himself as Wales’ number one before his injury, he is once again in contention with Burnley goalkeeper Wayne Hennessey.

Ward said: “The special thing about this group is if you’re a goalkeeper or a striker, we just want to do well whether you’re in the team or not.

Wales will fly direct to Poland for their first Nations League match in Wroclaw on June 1 before they can focus solely on the decisive World Cup tie.

The only players not in training camp are the ones taking part in the club finals this weekend. Gareth Bale hopes for a swan song from Real Madrid in the Champions League final against Ward’s former club Liverpool on Saturday.

Then on Sunday, Nottingham Forest winger Brennan Johnson and Huddersfield Town’s Sorba Thomas will meet in the Championship play-off final before the duo embark on Wales.

Ward said that whatever happens in the European masterpiece, Wales captain Bale’s mood will not change as he enters the Wales camp, although he said: “It would be good for Gareth to finish his time in Madrid on a high.” .

We all know what a legend he is, regardless of what is said in Spain about his time at Madrid.”

Having been to Liverpool and Huddersfield, Ward has plenty of previous clubs to monitor this weekend. He but he was born in Wrexham and started his career at the racecourse.

So, after Wales training on Saturday morning, Wrexham fan Ward will eagerly reach for a TV to watch his beloved club’s National League play-off semi-final with Grimsby.

He said: “They have been amazing. What the owners [Hollywood stars Ryan Reynolds and Rob McElhenney] have brought to the club has galvanized everyone from the players to the staff.

“I went to Notts County and stood amongst thousands of Wrexham fans. It was something I hadn’t seen at the club for a long time. It was the chalk and cheese of the club I was at so many years ago.”

Of course, Wrexham fans will be faced with a club vs. country attendance dilemma on June 5 if their side beat Grimsby. The National League play-off final is at West Ham’s London stadium on the same day that Wales face their decisive World Cup fixture in Cardiff.

Ward will feel a “point of sadness” for fans who might be forced to choose one or the other. But overall, he believes Wrexham, who were relegated from the Football League in 2008 when he was in the club’s academy, are on the upswing.

“They’ve had some amazing results, there seems to be a good bond and spirit. Everything is moving in the right direction,” he added.

For Ward, a Wales and Wrexham fan, the goals for club and country this summer are strikingly similar: “Hopefully it’s just a matter of time and that time is in the next few weeks.”