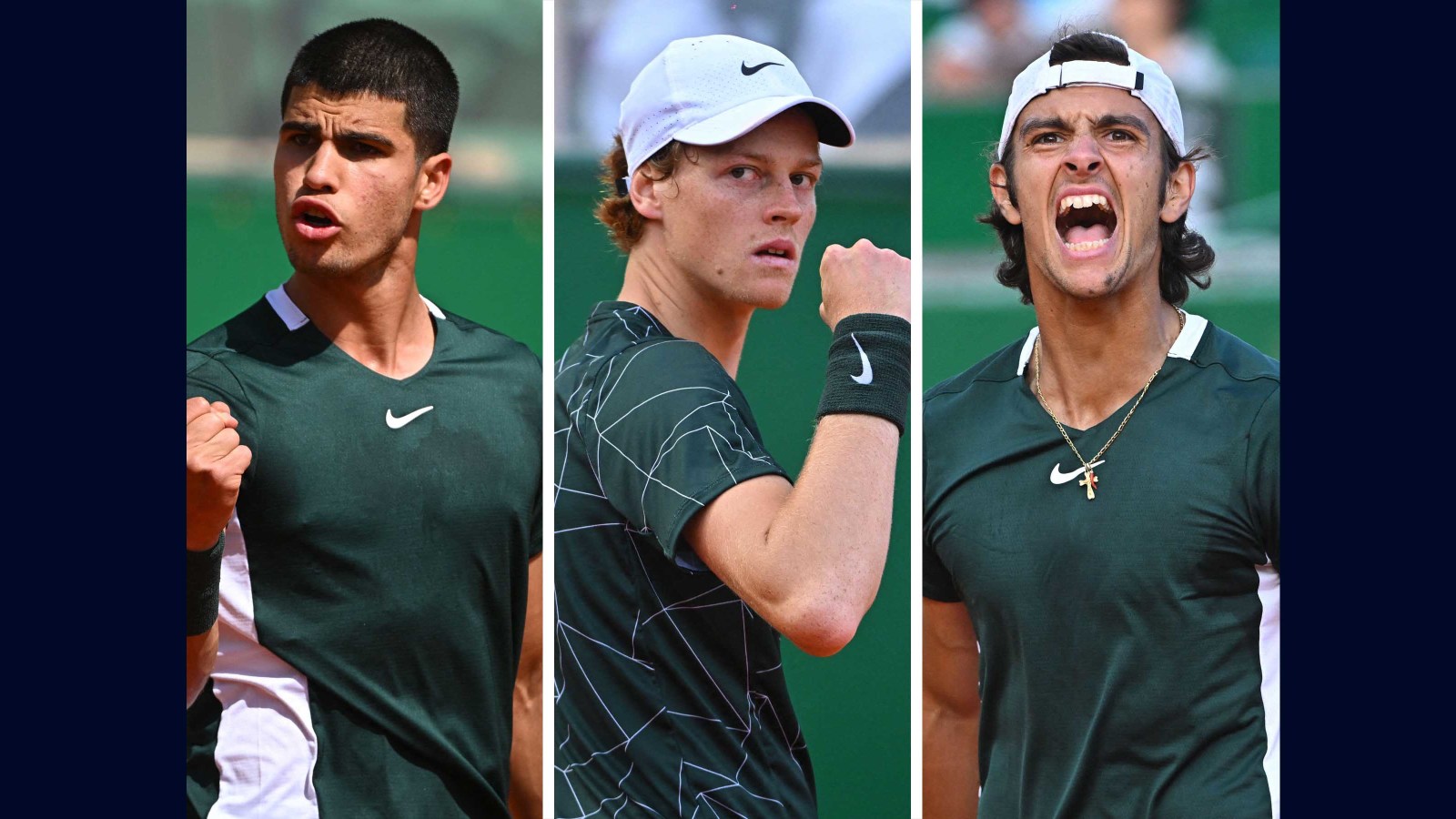 Men’s tennis, for the last decade and a half, has been absolutely dominated by the ‘big three’ of Roger Federer, Rafael Nadal and Novak Djokovic.

It has been the most sensational era to watch, with possibly the top three players arriving and competing at the same time.

However, all three are nearing the end of their careers now, and tennis has to look to the next generation for their posters.

And, in Carlos Alcaraz, Lorenzo Musetti and Jannik Sinner, the ATP may have a trio ready to fill the void.

It is easy, perhaps too easy, to make comparisons between Rafael Nadal and Carlos Alcaraz.

In fact, people have known Alcaraz and his talent since he was 15 years old, and ever since then he has had to endure the nickname ‘new Rafael Nadal’.

He himself has always distanced himself from comparisons, and rightly so. They’re obviously not useful, but they’re not particularly accurate either.

Their games are quite different when you dig into them, but they do share one striking similarity, and that is that they are both incredible warriors on the pitch.

To be fair, it is a trait that most Spanish players seem to share. They are famous for two things actually: clay prowess and supreme sand.

Alcaraz has already shown that he is a true warrior on the court, no more than when he faced Nadal himself in the semifinals of Indian Wells.

The youngster ended up losing the match, but it was so difficult to beat him that Nadal ended up getting injured in the process.

Looking ahead, it is almost impossible to see Alcaraz not going on and becoming a multiple Grand Slam winner. He probably won’t win the 21 (and counting) that Nadal has, but the talent is there.

Also, even though Alcaraz is only 19 years old, he is already at a level where he can realistically compete for any title in men’s tennis, and that is remarkable in itself.

Lorenzo Musetti is developing slower than many would have liked to see, but there hasn’t been a talent like him on the ATP Tour in a while.

Musetti is 20 years old, so you would expect him to be more advanced than Alcaraz, but although Alcaraz has developed physically at a young age and relies on a power play, Musetti is a touch player, and finesse takes longer. to perfect himself.

In that sense alone, the Italian is reminiscent of Roger Federer, who was a year or two older than Rafael Nadal when they started winning it all.

That’s not the only similarity, either. For starters, Musetti, like Federer, has a graceful one-handed backhand at a time when he dominates the two-handed alternative.

He’s also a true shot taker, always looking to attack and go for the big, game-winning shots. That was something that always set Federer apart from the more defensive Nadal and Djokovic.

Musetti is one of the three who also has mass charisma. He has the looks and has already appeared as the cover star in men’s fashion magazines. He says that if he couldn’t have been a tennis player, he would have been an actor, such is how comfortable he is in the spotlight.

Of the three players featured here, Musetti is the one you think could still go either way in terms of his future.

At the moment, he just isn’t patient enough and wants to go after his big winners all the time. That leads to too many unforced errors and then to frustration, which further decreases his patience.

However, if he can learn the patience to properly build his points before unleashing his weapons, Musetti will become a major draw in tennis for many years to come.

Certainly his compatriot Jannik Sinner sees the talent, saying of Musetti: “He hits the ball very hard, he’s very good at moving it, changing. Maybe now he’s a better player than me.”

Every time he describes Novak Djokovic as a ‘machine’ or a ‘robot’, he risks criticism from his legion of devoted fans who see him as much more than that.

That’s a reasonable position to take as well. Djokovic is actually one of the most emotional and passionate players on the ATP Tour, and definitely one of the biggest personalities as well.

However, in this sense, we absolutely refer to ‘machine’ as nothing more than a compliment. Playing Djokovic is often like playing tennis against a brick wall in that the ball always seems to come back to you from the baseline no matter what you do.

While the GOAT debate is ongoing and contentious, surely no one will argue with the statement that Novak Djokovic is the most powerful baseline player tennis has ever seen, and Jannik Sinner is someone whose game seems very similar to the Serb’s. .

Sinner was a champion skier in his youth and has transferred that incredible poise to the tennis court to become one of the most agile and mobile players around.

Combine that with some extremely clean shots from the baseline and together they can often be overwhelming for opposing players.

Sinner, another Italian, is 20 years old and has already made his debut in the top ten, as well as making an appearance in the Tour Finals, albeit as a substitute.

Djokovic, as a package, may never be replicated. He is a unique product of upbringing in a war-torn country and a natural talent forged in the fires of the most competitive era in men’s tennis history.

Sinner is the closest thing we’ve seen to Djokovic in terms of his actual game, however, and he seems absolutely destined to win multiple majors before he’s even done in the game.

READ MORE: Who is the GOAT of tennis? We examine the claims of Rafael Nadal, Roger Federer and Novak Djokovic