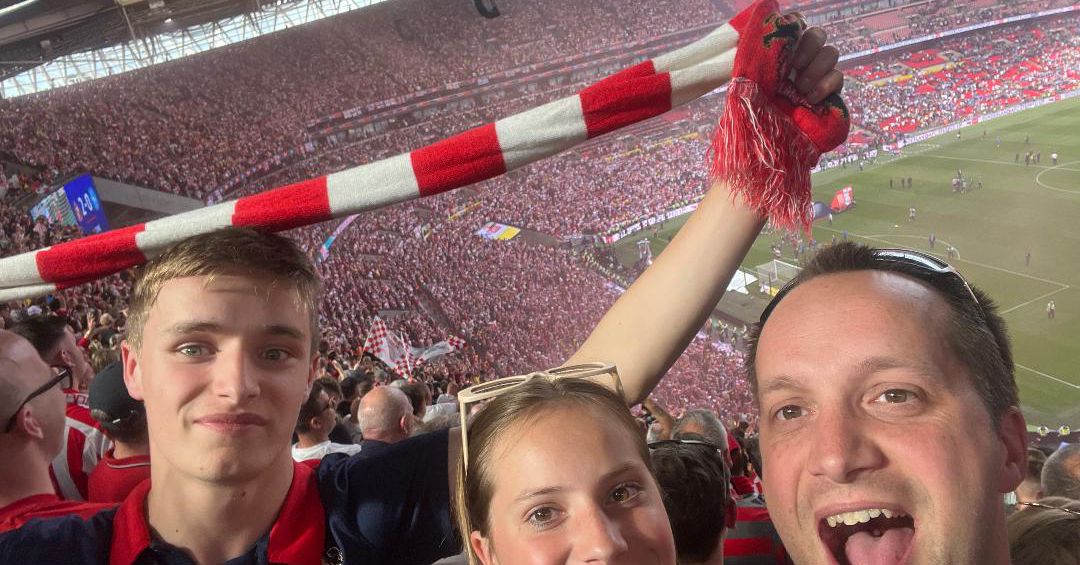 I was working from home the day the Play-Off Final tickets went on sale. Due to family commitments, I can’t attend as many games as I’d like these days, so I don’t have a season card and figured I’d have a hard time getting tickets. While sitting at my kitchen table on the laptop, I received a text from my 16 year old son. “Dad, can you wire me £60? I have some friends at school who have season cards but don’t go to Wembley and they said I can use their numbers to get tickets.

I was skeptical but I wired him the money and he promptly replied saying he had successfully bought three tickets. I didn’t believe him, and the fact that the email with the tickets didn’t arrive immediately increased my suspicion that this might not happen.

We made tentative plans anyway, I had existing commitments on Friday and Sunday, so we (me, my 16 year old son and 13 year old daughter) would have to drive there and back in one day. I got on JustPark and booked a parking space at ASDA Wembley. It still didn’t feel real.

Finally, the email came with the tickets: I checked the PDFs to make sure they looked genuine, then started to get more excited than a 41-year-old dad with a respectable job should admit.

The few days from when the tickets arrived until Saturday were a blur, I couldn’t focus on much else, quenching my thirst for anything Sunderland by devouring every bit of fantastic content put out by RR and other fan media in the build. up.

When the day finally came, I got up early, dragging the children who came with me out of bed. We set off down the freeway, red and white scarf billowing from the back window of the car. It seemed like every vehicle on the road at that point was filled with huge fans heading south.

In the excitement I had forgotten to put fuel in the car so quite early in the trip we stopped at Wetherby toilets to fill up. All the other people at the service station were wearing Sunderland clothes. The kids wanted breakfast so we made a long line in front of Greggs, 100% of the others in line were also riding Mackems.

Back on the road, we passed many more red-and-whites in cars and buses along the way. My mom called to see how we were feeling, I confidently predicted a 2-0 win. We arrived at the designated parking space at noon and headed straight for Wembley Way.

My daughter asked what we were going to do for 3 hours before the game, I told her we were just going to get soaked. We walked up and down Olympic Way and toured the stadium, taking photos and videos and chatting with family and strangers. faces we meet. We took a photo with Grant Leadbitter, using the fact that my children attend the same school as him on Chester le Street to interrupt him for what must have been the 10,000th time that day.

As Wembley filled up, the atmosphere increased, but it wasn’t what I expected. He had never been to Wembley with the boys before, but he hoped the excitement would be combined with that sick feeling in the pit of his stomach, the nerves and worry of failing at the final hurdle again, and the unimaginable prospect of yet another season. in the dark outside football.

That feeling was noticeably absent, not just from my body, but from the air and the bodies of the people who had followed the boys to this destination. I felt calm and confident, almost certain that this was our moment and I could feel that most of those around us felt the same way. This is what Alex Neil has managed to do: I had full confidence in him to make the right decisions, something I never remember feeling about a manager since the first half of Peter Reid’s tenure.

It was time to hit the field: we found our seats high above the field and marveled at the swarms of red and white that filled what seemed like the entire field. The pre-match video montage and Rory Fallow’s encouragement to the crowd began to build to a crescendo of noise. I had the privilege of attending the Liverpool vs Spurs Champions League final in Madrid a few years ago and the Reds fans singing “You’ll Never Walk Alone” was a sight to behold, but not like this, these were my people, my songs. .

As we stood, arms raised, belting out “And it’s Sunderland, Sunderland AFC,” I felt transported back to my first game on the grandfather clock at Roker Park nearly 30 years ago, singing the same song when I was teenager, now standing with my own teenagers singing by my side at the football house.

When the match started, I waited for my nerves to kick in, but they didn’t show. I jumped like crazy when Pritchard’s free kick hit the side of the net until my son had to point out that he hadn’t gone in. I didn’t have to wait long for us to notice, Embo fired straight through his keeper and he was on fire.

At 1-0, I always felt like we were in control, albeit an awkward scoreboard, knowing it might take a freak incident to turn the tide, and it almost did when Wright misjudged the rebound and let Vokes in, but the young Patto was inside. the right place at the right time, as he was throughout the afternoon.

When Stewart classily passed the ball into the corner of the net from the hapless Stockdale, joy turned to ecstasy! I looked at my children’s faces and saw that they understood him, despite his tender age and his limited exposure to the Roker roller coaster.

More photos, more videos trying to capture the noise and the atmosphere to relive it later, we stayed, as everyone seemed to, until the players left the pitch and headed to the locker rooms.

The chants of “Sunderland Take Over” echoed around the concrete stairs like I had never heard before and we moved as one down Wembley Way and back to real life. I spent the ride home listening to whatever Sunderland content I could find trying to lengthen the experience, but ultimately, the day had to end.

The days since then have often found me nostalgically scrolling through social media looking at photos, videos, reading articles and of course rewatching match highlights over and over again, struggling to retain the feeling of that day.

It was a day I never expected, and one I will never forget. Thanks Alex, thanks Sunderland. I can’t wait for the next season!