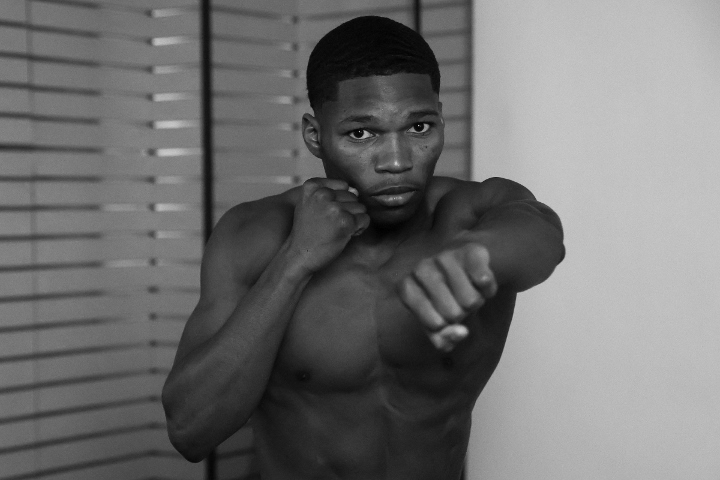 Ford (11-0-1 6 KOs) crosses the ropes in his fourth title fight and puts on the line the WBA Americas continental featherweight belt he won via split decision in his last outing, beating another man undefeated in Edward Vázquez in Fénix.

‘Savage’ is ranked No. 8 with the WBA and is closing in on the top five and may also have an impact on the IBF rankings, with the IBF North American belt on the line and Ford currently ranked No. 13 with the organization.

Those belts and ratings will have Medina (13-0 7 KOs) licking his lips as he fights for a title for the first time in his career and on home turf. The 21-year-old notched his seventh victory inside the distance in his last outing in March, forcing Armando Frausto to retire after seven rounds of their San Antonio showdown.

“This is the third time in my last five fights that I have gone and faced an undefeated fighter in front of his fans,” Ford said. “I don’t see any of these other prospects stepping up.

“I am excited and grateful for the opportunity,” Medina said. “I want to thank my promoter Rick Morones of TMB Promotions and my manager Greg Hannley and Matchroom for the opportunity. I am looking forward to fighting in my hometown and putting on a spectacular show for my fans and family.

“Being able to fight on the undercard of one of my closest friends, ‘Bam’ Rodriguez, who I’ve known practically all my life and grew up fighting with, is an honor. I am ready to show my skills to the world.”

Ford and Medina will wrap up the ‘Before The Bell’ telecast on a big night of action in Texas, with talent from New Jersey joining more rising American stars on a packed lineup.

Marc Castro (7-0 5 KOs) tastes action for the third time in 2022 and does so against undefeated Puerto Rican Jean Guerra Vargas (6-0 1 KO) in eight rounds at lightweight. Castro earned his seventh win in the paid ranks earlier this month in his fourth fight on a Canelo Alvarez undercard, and Fresno’s talent is grateful to be so active as he continues to hone his craft and prove himself against the hungry Vargas.

“I am grateful to stay healthy and active,” Castro said. “I’m still working hard every day and ready to put on a show for my fans.”

Nikita Ababiy (11-0 6 KOs) is fighting for the first time in 2022, and ‘White Chocolate’ thinks he will dazzle when he takes on Noe Larrios Jr (14-1 6 KOs) over eight rounds at middleweight.

“I’m super excited to get back in the ring and show everyone what I’ve been working on,” said Ababiy. “I’m excited for everyone to see me perform. I know you all missed white chocolate, it’s time to make some noise again and give people the excitement they’ve been missing!

“June 25, Big Steppa, we’re back,” Coe said. “I am fighting an undefeated opponent and these are the challenges I want. I know what I am capable of and the ability that I have and I am excited to show my skills. This is an opportunity for me to show how good I am and that is exactly what I plan to do.”

Rodriguez and Rungvisai headline a great night of action with those young talents united for three more world title fights.

Julio Cesar Martinez (18-2 14 KOs) and McWilliams Arroyo (21-4 16 KOs) pick up where they left off in their narrowed shootout for Martinez’s WBC flyweight world title, where they both hit the canvas in the first round and Arroyo touched down again in the second, before the action at New Hampshire in November had to be halted after Arroyo suffered a nasty cut from an accidental headbutt.

World title clash number three on the bumper card will see IBF and WBA super bantamweight world champion Murodjon Akhmadaliev defend his titles against Ronny Rios. The pair were scheduled to meet in New Hampshire in November, but COVID ruled Rios out and he was replaced by the game’s final challenger, Jose Velasquez. Akhmadaliev (10-0 7 KOs) retained his belts with a near shutout on the scorecards, going the distance for the third time in his 10th pro fight and second as world champion. Rios (33-3 16 KOs), the mandatory challenger for the WBA crown, is seeking glory for the second time in his 36-fight career after challenging Rey Vargas for the WBC 122-pound belt in August 2016. .

Undisputed welterweight leader Jessica McCaskill (11-2, 4 KOs) makes the third defense of all her marbles at 147 pounds against Alma Ibarra (10-1, 4 KOs). McCaskill tore the straps off longtime ruler Cecilia Braekhus on the streets of downtown Tulsa in August 2020 and beat the Norwegian in a rematch for her first defense in March 2021. The Chicago girl recorded the fourth victory for stoppage of his career in the second defense. she from the belts in December, ending Kandi Wyatt’s challenge in the seventh, and she will face the stern test in the form of Ibarra.