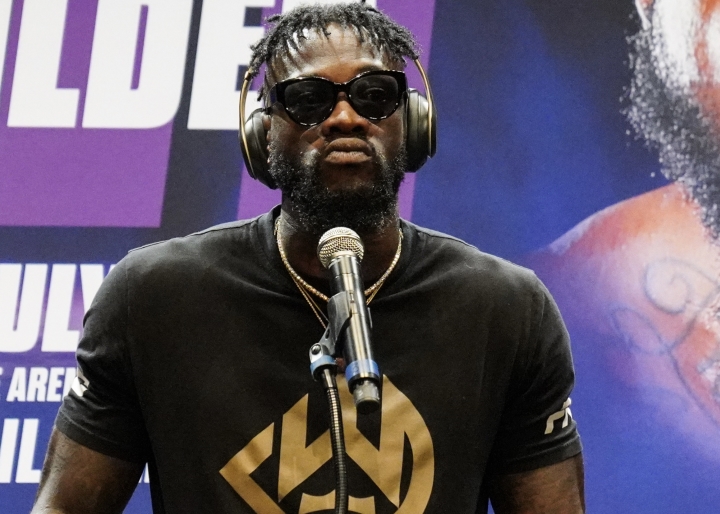 Otto Wallin will essentially be kept busy in another non-televised fight Thursday night in Dearborn, Michigan.

Assuming the favored heavyweight contender defeats Rydell Booker in their 10-round main event, his promoter hopes to give the Swedish southpaw a more meaningful fight later this year. Wallin would welcome a rematch with Tyson Fury any day now, but facing the former WBC champion Fury defeated twice would also work.

“I think Otto would love to fight Deontay Wilder if Deontay Wilder,” Wallin’s promoter Dmitriy Salita told BoxingScene.com. “I think it’s a great fight that makes a lot of sense because Otto gave Tyson Fury the toughest fight of his career. Wilder obviously lost to Fury twice in his memorable trilogy. So, I think that’s the fight that makes the most sense. And I’ve actually contacted Team Wilder and let them know that Otto may be available.”

Wilder, 36, revealed earlier this week that he intended to continue his career.

The hard-hitting Tuscaloosa, Alabama native suffered a brutal 11th-round knockout loss to Fury in his most recent appearance, which occurred on Oct. 9 at T-Mobile Arena in Las Vegas. Wilder (42-2-1, 41 KOs) has fought just once since Fury stopped him in the seventh round of their February 2020 rematch at the MGM Grand Garden Arena in Las Vegas.

Wallin, 31, has been struggling to find a high-profile opponent since Dillian Whyte pulled out of their October 30 fight in London 10 days early due to a shoulder injury.

London’s Whyte (28-3, 19 KO), who was Fury’s mandatory challenger, pursued that title shot once he was healthy, rather than reschedule his fight with Wallin (23-1, 14 KO, 1 NC). ). Fury knocked out Whyte in the sixth round on April 23 before a record crowd of approximately 94,000 at Wembley Stadium in London.

“The big fights we want are with Joshua and Usyk, but those guys are busy,” Salita said in reference to the rematch between Oleksandr Usyk and Anthony Joshua this summer. “So, you know, we would fight Dillian Whyte. That’s still an important fight, even after what happened with him and Tyson Fury. [Joseph] parker, [Dereck] Chisora, Joe Joyce, I think all of those fights are on the cards for Otto and they are fights that we would like to explore.”

Promoter Frank Warren has announced that New Zealand’s Parker (30-2, 21 KOs), a former WBO champion, and London’s Joyce (13-0, 12 KOs) will meet at an unspecified date in the UK.

“Rydell Booker is older, but he can fight,” Salita said. “I saw him in the gym about a month ago and he was really getting ready. He is taking this fight seriously. It is a good opportunity for him. He is fighting at home. It’s where he grew up, where his trainers and his boxing memories are. And it’s perhaps the most significant fight for him as a pro in Detroit. I know he comes to fight. Older fighters still have a good one. [fight] left in the bank. Rydell is going to put on a good performance.”