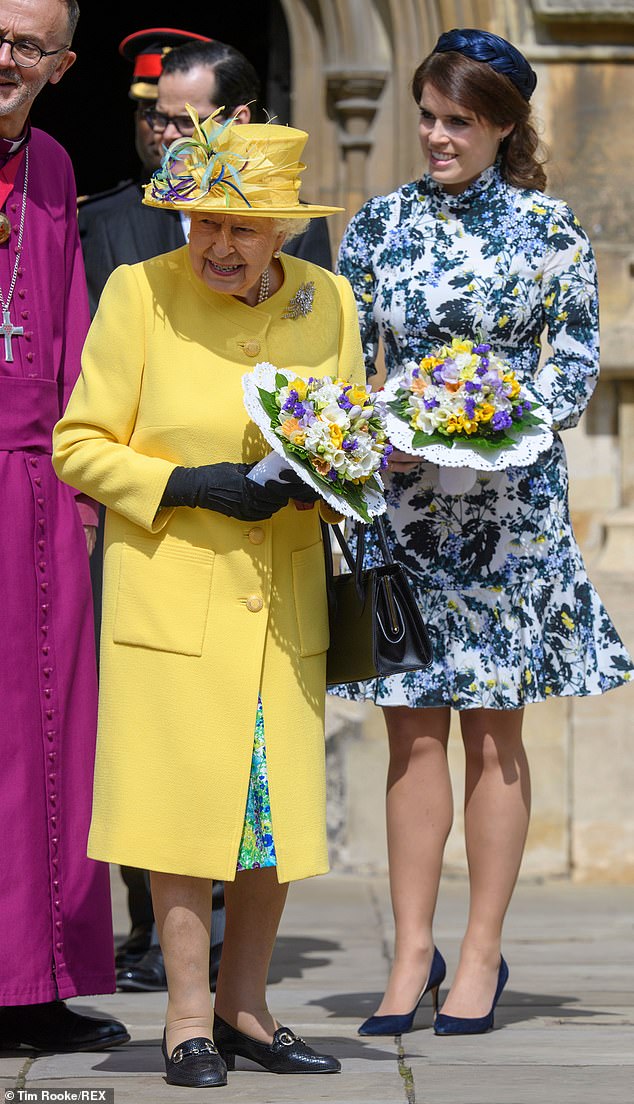 Eugenie, 32, writing in The Spectator magazine, said she hoped her one-year-old son August would grow up to have the Queen’s “patience, calm and kindness, while always being able to laugh at himself and keep a twinkle in his eye.” ‘.

She described the nation’s longest-reigning monarch as someone who has transcended time and been “a constant rock to so many.”

Reflecting on her ‘special little family’ with the arrival of August, who was born in February last year, Eugenie said: ‘I think of my grandmother and what she has represented, to so many people and to our family over these 70 years.

Princess Eugenie has paid a moving personal tribute to her ‘grandmother’ the Queen in an article for The Spectator. Photographed together in a rare joint engagement at the Royal Maundy Service in April 2019

In the piece titled ‘My Pride in Grannie’, the princess said: ‘Seventy years is really something, isn’t it?

“The Jubilee stands as testimony to a woman who has transcended time and been that constant rock for so many when the world can feel so fragile.”

He recalled seeing the Queen and her ‘grandfather’, the Duke of Edinburgh, standing, waving and smiling for eight hours in the rain during the Diamond Jubilee celebrations in 2012, ‘keeping the family and the nation moving forward’ as they had done for decades.

Eugenie said she hopes August, her son with husband Jack Brooksbank, will inherit the queen’s patience and kindness.

Eugenie, pictured on her wedding day with her grandparents, paid tribute to the Queen and Duke of Ediburgh for always “keeping the family and the nation moving.”

But the Queen’s attendance will likely only be confirmed in the morning, and royal fans are hoping to see her appear on the balcony with her family for a special flight, and possibly even check on the troops.

The monarch is expected to make one last appearance on the balcony of Buckingham Palace to round off the weekend and watch Ed Sheeran sing the national anthem with a choir made up of Britain’s ‘national treasures’.