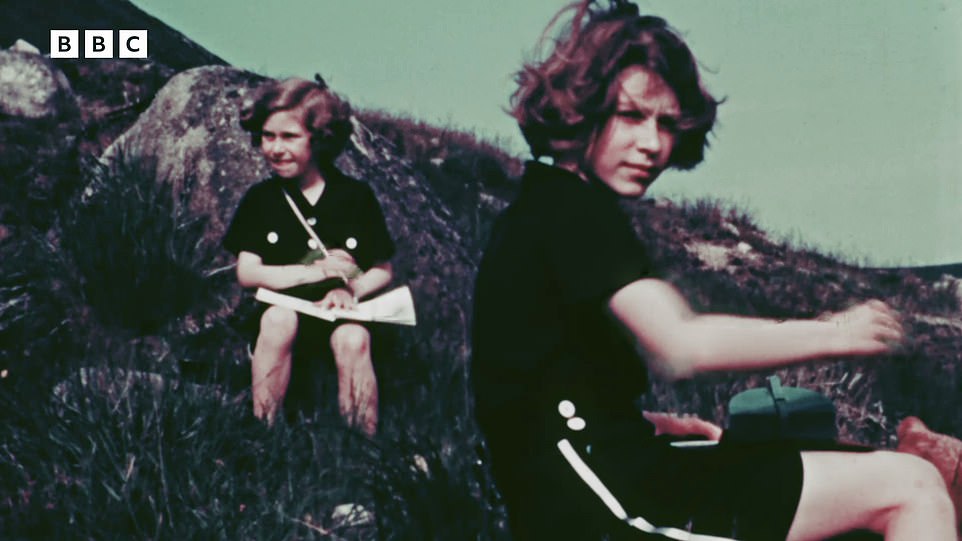 Running through the swamps, paddling on the lake, and playing with her corgi, these photos of a carefree young Princess Elizabeth seem a world away. the Queen that has become so well known today.

In unpublished images released by Buckingham Palace and the BBC ahead of their Jubilee next week, the royal, then 12, skims stones, runs with princess daisy and he looks completely carefree during a summer vacation at Balmoral in 1938.

As these images show, the young queen feels at home in Balmoral, her summer residence in Scotland.

The photos show the princesses playing on the banks of Loch Muick and Glas-allt-Shiel waterfall with their father. George VI walking with the family labrador.

Balmoral is very close to the Queen’s heart, and she named her new corgi ‘Muick’ (pronounced Mick) after the loch on the Scottish estate.

Running through the swamps, paddling on the lake and playing with her corgi, these photos of a carefree young Princess Elizabeth seem worlds apart from the Queen who has become so well known today.

In never-before-seen footage released by Buckingham Palace and the BBC ahead of their jubilee next week, the then-12-year-old royal brushes stones, runs with Princess Margaret and looks completely carefree during a summer break at Balmoral in 1938. .

The footage is taken from a private home movie captured at the Estate.

It will be broadcast on the BBC, which has been granted unprecedented access to the reels by the Queen, in her documentary Elizabeth: The Unseen Queen, which airs on May 29.

The royal family have filmed each other since the 1920s, but hundreds of these home recordings have been kept private by the Royal Collection in the vaults of the British Film Institute for decades.

They will now be shared with the public, giving viewers a new insight into the Queen’s life as she celebrates her historic 70 years on the throne.

In a new preview clip released ahead of this weekend’s documentary, George VI is seen smiling alongside his daughters Elizabeth and Margaret.

As these images show, the young queen feels at home in Balmoral, her summer residence in Scotland.

Balmoral is very close to the Queen’s heart, and she named her new corgi ‘Muick’ (pronounced Mick) after the loch on the Scottish estate.

The princesses, both in pretty evening dresses and cardigans, happily chat with their father as the camera rolls.

Elsewhere, Queen Elizabeth, the Queen Mother, is seen sunbathing. A jovial George VI, dapper in his white sailor’s clothes, walks across the deck before staring into the lens.

His close relationship with his eldest daughter is glimpsed in an impromptu game of toss and catch.

Royal Navy sailors keep busy as the camera pans over them, showing how they kept the ship fit for their VIP passengers.

Elizabeth looks young and carefree in the video, smiling under the wide blue sky.

The photos show the princesses playing on the shores of Lough Muick and Glas-allt-Shiel Falls with their father, George VI, out for a walk with the family Labrador retriever.

The documentary follows the Queen’s journey from her earliest childhood, pushed in a pram by her mother, to her coronation at the age of just 27 in 1953, following the death of her father, George VI, in 1952. Photographed in 1938

The footage is set in speeches made by Her Majesty: her 1996 Christmas broadcast in which she discusses the importance of building relationships with other countries, and her speech at the Guildhall on June 11, 1947, a couple of months after returning from Africa.

The documentary follows the Queen’s journey from her early childhood, when her mother pushed her in a pram as a baby, to her coronation at the age of 27 in 1953, following the death of her father, George VI, in 1952.

The documentary takes viewers behind the scenes of the queen’s upbringing and reveals the warmth of her relationship with her parents.

One clip shows young Elizabeth at the Royal Lodge in Windsor in 1940, where she amuses herself in dresses to match princess daisy – and a corgi – and falls backwards onto a chair in an apparent prank George VI.

Loch Muick is said to be one of the Queen’s favorite spots on the Balmoral estate and she named her corgi after the loch.

It captures Prince Philip’s first extended visit to Balmoral in 1946, when the couple’s engagement was not yet public: a smiling Princess Elizabeth shows the camera her engagement ring.

It also shows Princess Elizabeth as a young mother, with the King and Queen as loving grandparents to Prince Charles and Princess Anne.

Other rare moments include her grandfather George V (known to the Queen as ‘Grandfather England’) sailing with the Queen Mother off the Isle of Wight in 1931, images of Princess Elizabeth with her uncle Prince George, the Duke of Kent who tragically died. in a plane crash in 1942 while on active duty, and a moving glimpse of the royal family at Balmoral in 1951, King George VI’s last visit there.

Unlike conventional documentaries that feature interviews and narration, Elizabeth: The Unseen Queen relies heavily on The Queen’s own voice and words, along with newsreel audio.

The filmmakers heard more than three hundred speeches from the Queen, spanning more than eight decades.

Beaming with her father and sister, this is young Princess Elizabeth enjoying a voyage on the high seas. The footage is from a private home movie captured on HMS Vanguard, the ship that took the royal family to South Africa in 1947.

The videos show the sisters, Princess Elizabeth and Princess Margaret, in a more relaxed way during a break in South Africa.