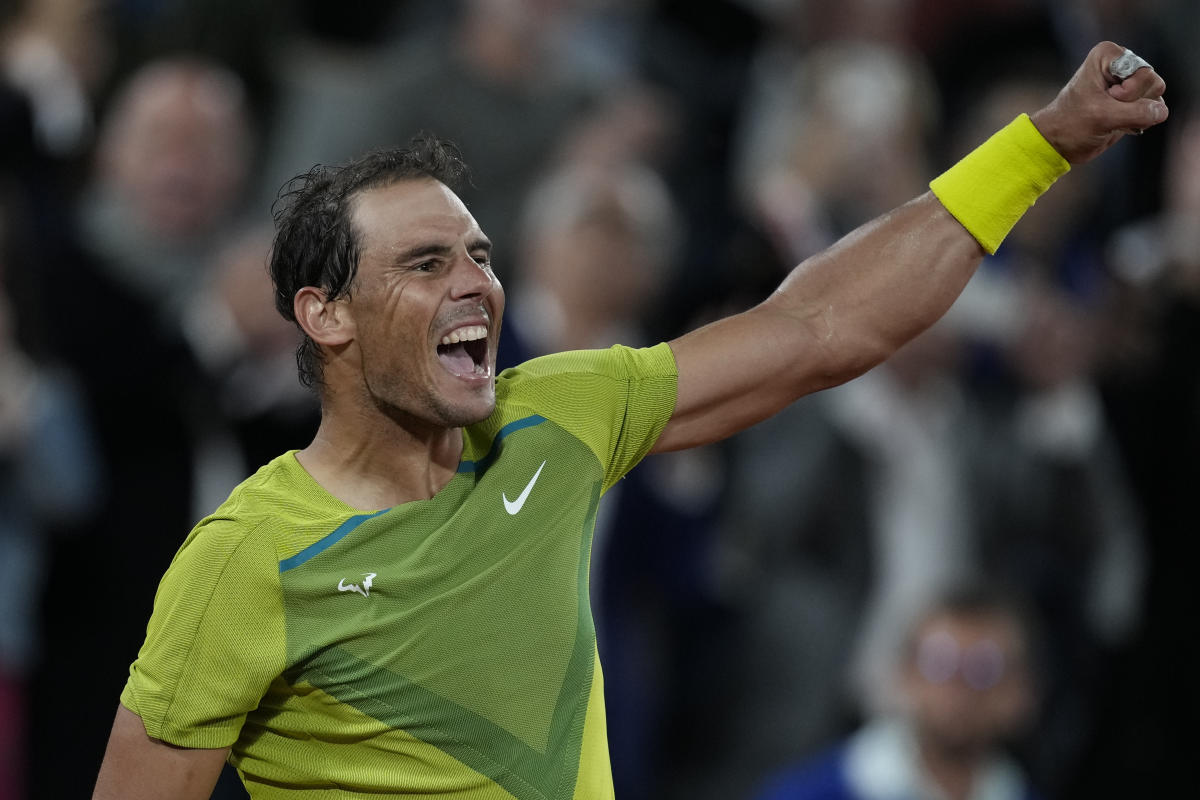 Welcome to Round 2 of the French Open! Over three days of first-round matches, we saw some stunning upsets (Barbora Krejcikova, Ons Jabeur) as well as some magical comebacks (Stefanos Tsitsipas, Aryna Sabalenka).

What happened on day 4? Read on to find out.

Rafael Nadal reached the third round and marked a milestone in the process. The fifth-seeded Spaniard defeated Frenchman Corentin Moutet in straight sets on Wednesday, 6-3, 6-1, 6-4. The win marked his 300th career Grand Slam appearances, third all-time among men behind Roger Federer (369) and Novak Djokovic (324).

Nadal opened with 3-0 and 4-0 leads in the opening sets before rallying from a 2-0 deficit to secure the third and the match. He advances to face Botic Van De Zandschulp of the Netherlands on Friday in his quest to secure his 14th French Open title.

The most popular player on the ATP tour was almost eliminated from the French Open. Carlos Alcaraz, who arrived at Roland Garros on a roll, was almost stopped short by his compatriot Albert Ramos-Vinolas. It was five sets and four hours and 34 minutes, but Alcaraz came back from an almost certain loss to win the match 6-1, 6(7)-7, 5-7, 7-6(2), 6-4.

Alcaraz’s mid-match collapse can be attributed to unforced errors and his young age. Alcaraz is 19 years old, 15 years younger than Ramos-Vinolas, and he couldn’t always find his footing when unforced errors and missed opportunities began to pile up. Alcaraz’s drop shots weren’t as sharp as usual, and he hit the ball too hard. But facing match point in the fourth set, he dug deep and took a stand, leveling the score and then dominating Ramos-Vinolas in the tiebreak. In the final set, he was down 0-3 and had to make another comeback. Alcaraz won game five by putting on one of the most amazing rallies anyone has ever seen.

That point allowed Alcaraz to serve for the match, which he later won. For a great player, winning when he’s playing his best tennis is easy, but it takes real talent and mental toughness to win when he’s not playing his best. That’s what Alcaraz accomplished on Wednesday, and he will carry the lessons he learned with him into Round 3.

Djokovic (mostly) moves on to Round 3

As usual, there was no real risk of Novak Djokovic, the world No. 1 male player, losing his match to No. 38 Alex Molcan. Djokovic cruised to victory 6-2, 6-3, 7-6(4), but not without some trouble. Molcan fired it up in the final set, struggling to extend the match for a chance to draw with Djokovic. But Djokovic is Djokovic, and he closed it out in the tiebreaker. Molcan is a young player on the rise, but Wednesday was not his day to topple a giant.

Sebastian Baez, a 21-year-old from Argentina, nearly defeated World No. 3 Alexander Zverev on Wednesday, pushing him to the brink in a five-set match that Baez came close to winning several times. Zverev looked deflated at first, allowing Baez to claim a two-set lead. With the game on the line, Zverev finally woke up and took the next two sets quite easily, but the game would be decided in the final set. Baez tested Zverev throughout, but some missed shots ended up deciding the match. Zverev won 2-6, 4-6, 6-1, 6-2, 7-5.

Sakkari was in great surprise

Maria Sakkari has been eliminated from the French Open. The No.4 seed was defeated by Karolina Muchova in an extremely close match, with both teams reaching the tiebreaks. Unfortunately, Sakkari was on the losing end of both as Muchova cruised to a 7-6(5), 7-6(4) victory. Sakkari struggled early on, with Muchova coming out strong and winning four of the first five games. Sakkari was able to call, but she was unable to take the tiebreaker. She had a chance to win the second set twice, but she couldn’t find holds when she needed them. Four of the top ten women’s seeds are now out of the tournament.

After a difficult second set, Coco Gauff defeated Alison Van Uytvanck 6-1, 7-6(4). Initially it looked like the match would be all Gauff, as she cruised to an easy win in the first set. But Van Uytvanck really put up a fight in the second set, taking it all the way to tiebreak. Gauff, who just graduated from high school, kept her cool throughout the process, which definitely helped her handle the pressure. It was probably also helpful that the referee didn’t give him a soft training warning this time.

Emma Raducanu’s debut at the French Open is over. The 12th WTA tennis player in the world was defeated by Aliaksandra Sasnovich, losing 6-3, 1-6, 1-6. Raducanu won the first set emphatically, showing a lot of emotion, and from then on it could be assumed that everything was fine. Since last year’s US Open (which she won), she was 20-2 after winning the first set of a match. But once Sasnovich started to figure things out, Raducanu’s body language changed. She began to look defeated long before she finished the match and was unable to get out of a tailspin.