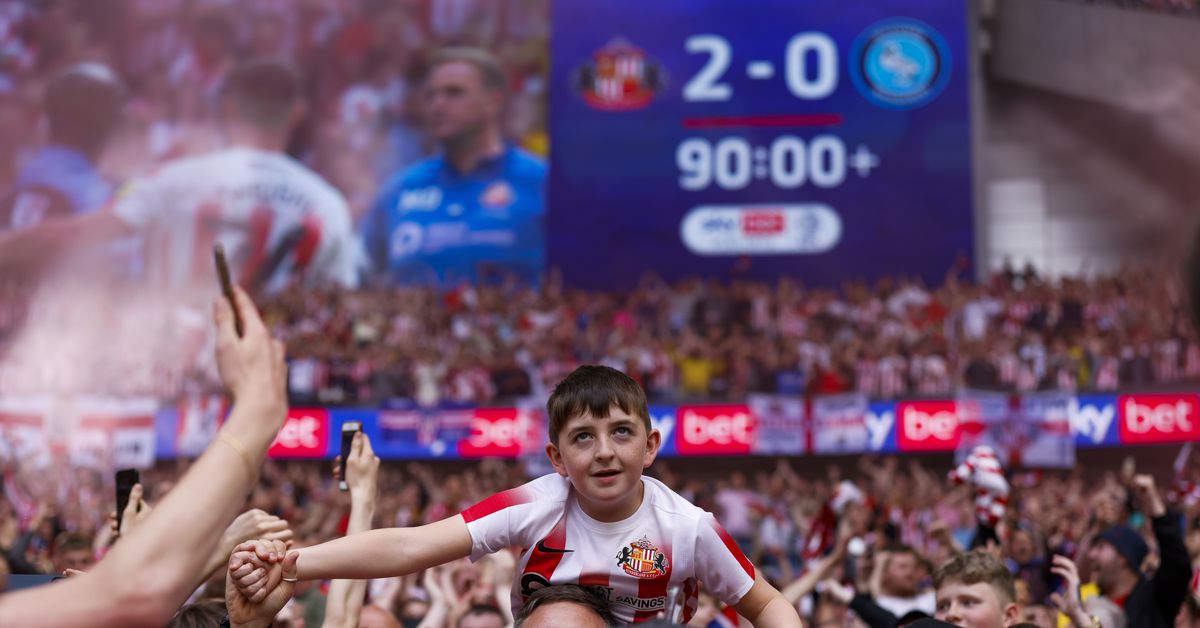 The last few weeks have been something of a whirlwind: the dramatic showdown that saw Sunderland earn a playoff place, combined with my final exams from university, has made the last month particularly eventful.

Before our playoff campaign began against Sheffield Wednesday, I must admit I wasn’t feeling so optimistic. The constant reminders of our lousy playoff record didn’t help matters.

So, I was both surprised and ecstatic when Roberts’ late goal secured us a place at Wembley. He was still nervous about our chances, but he knew that he had to be there for the final.

I was lucky to pick up two tickets; one for me and one as a surprise for my Sunderland obsessed dad.

As is the case with many fans, rooting for Sunderland is an affliction that has been passed down from generation to generation. My late grandfather started the trend.

A native of the North East, he spent his younger years following Newcastle, before coming to his senses later in life and switching his allegiances to Sunderland (in reality, he could no longer afford a Newcastle season ticket, leaving Sunderland the unlucky one). alternative). He passed on his love for the club to my dad, who has always passionately supported the boys from afar. So when I arrived, supporting Sunderland felt less like an option and more like an obligation.

There are many photos of me growing up, decked out in various red and white uniforms, hats, and scarves. Now it is clear to me that this was all an attempt at indoctrination. Well, it worked, and although I’ve never actually lived in England, Sunderland has been a part of my life ever since.

The trip to Wembley is always a memorable experience for fans, but we had a particularly unique way of getting there. We were staying with family, who were incredibly kind to accommodate our visit on such short notice. The only slight problem was that we would have to take the train to Wembley from, of all places, Wycombe.

As we drove towards the station there was a sea of ​​Wycombe fans.

We were behind enemy lines so I zipped up my jacket, stashed my Sunderland gear and went undercover for the trip to Wembley.

Seriously speaking, the atmosphere on the train was fantastic. There were many families traveling together, waiting for their big day. Two small children were sitting next to us and they could hardly contain their excitement. “There’s the bow!” one of them yelled as the iconic silhouette of Wembley came into view. There was a truly cheerful mood, though he secretly hoped their spirits would dampen on the journey back.

It is at this point that I must mention my somewhat checkered history of attending Sunderland games. My first experience of seeing the guys live was in 2007 when I saw us take on Wolves in the Championship.

Daryl Murphy scored the first goal early in the game. The sudden roar of the Sunderland faithful was so overwhelming that I immediately burst into tears and asked if we could go home.

My grandfather was not very impressed and told me to toughen up. That proved to be useful advice, both for when Ross Wallace gave us a two-goal lead and for the repeated disappointment I would endure during my time supporting Sunderland.

That game ended 2-1, and it was the first and only time I’ve ever attended a game that we won. I saw plenty of draws during our time in the Premier League, including some fascinating goalless draws against Arsenal and Swansea. I was also there when we lost the Capital One Cup final to Man City (I still can’t figure out how Yaya Toure scored that goal without running). Although the results were not very good, I enjoyed all these trips.

A personal highlight of mine was a home game against West Brom in our last season in the top flight. We were down a goal, and it had been a typically lousy Moyes-era performance. With ten minutes to go, a guy behind me decided he’d had enough and got up to leave. “I’m sick of this,” he announced to no one in particular, “same shit every damn time.” The woman sitting next to him said, “Oh, well, see you next week?” He nodded angrily and left, and I couldn’t help but laugh.

I think that sentiment sums up the life of a Sunderland fan, especially in recent years. They have let us down time and time again, but we continue to support the team, hoping that somehow, by some miracle, things will get better.

That turned out to be the last time I would see the boys play live. A combination of personal commitments and a global pandemic has prevented me from making the trip for the past few years, which I guess has been a blessing in disguise. That made me even more nervous as we walked down Wembley Way. The team hadn’t won a game with me in attendance since 2007.

Maybe I was unlucky?

It’s the kind of totally irrational nonsense that can only exist in the mind of a football fan.

As we took our seats, my dad’s nerves began to hit as well. His typically loud and outgoing nature had given way and now he seemed much more subdued and anxious. I think all the excitement of the trip had worn off, and now the importance of the match was beginning to sink in. He, like many other attendees, had already experienced his fair share of Wembley angst. He’d already seen them lose there four times, and I didn’t like the idea of ​​being responsible for him seeing a fifth.

As expected, I was nervous throughout the match.

Looking back at the highlights, I can see that Sunderland mostly controlled proceedings and, barring a handful of chances, Wycombe rarely posed much of a threat to Patterson in goal. But at the time he was convinced that we would concede a silly penalty or an own goal and it would all go wrong, because it always happens.

But this time it was not like that. Embleton’s goal was the realization of every Sunderland fan’s childhood dream (albeit with Stockdale’s help). Pritchard, Roberts and Stewart were a constant threat going forward and defensively Sunderland were well organized and hard to break down. The atmosphere was electric throughout the match, and then Stewart’s goal took it to another level. The strangers hugged each other as if they were old friends.

I could not believe it.

In fact, we were going to do it.

I was surprised to find that I got a little excited as the final whistle approached. The last few years have been incredibly difficult, with the pandemic making life even more challenging and complicated than it already was.

But during those couple of hours at Wembley, everything seemed so simple.

Just me, my dad and 49,000 people, dressed in red and white, basking in the London sun, celebrating a victory that seemed long overdue.