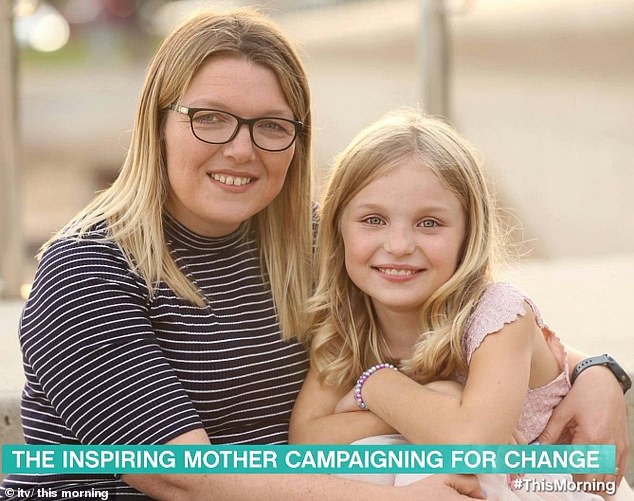 A mother whose daughter tragically died after a year-long battle with a rare form of cancer has revealed she will go to parliament to fulfill the 10-year-old’s wish list.

During an appearance on itvThis morning, Charlotte Fairall, from Stubbington, Hampshire, explained that she did not know what the symptoms of cancer were before her daughter Sophie was diagnosed with rhabdomyosarcoma, a rare type of cancer that forms in the soft tissues of children, in September of 2020. .

She said Sophie had had constant stomach pains, nausea and abnormal bleeding which are “real red flags” but doctors suggested the symptoms could be her period.

When she started treatment, Sophie created a wish list with the aim of creating more awareness of cancer symptoms, more toys in hospitals. and better food for people visiting loved ones in the hospital.

Tomorrow’s House of Commons debate on childhood cancer outcomes will be the first time the issue has been discussed in parliament.

Charlotte Fairall, from Stubbington, Hampshire, reflected on the death of her daughter Sophie (both pictured) before going to parliament

Charlotte said Sophie (pictured) had been a “happy” child, before complaining she was unwell around July 2020.

Charlotte explained that going to parliament next week is her way of fulfilling Sophie’s last wishes.

The mother-of-three’s appearance on the daytime show comes just months after she and Sophie visited the set to check off an item on her wish list before her death.

Host Holly Willoughby admitted she felt ‘lucky’ to have had the opportunity to speak to Sophie.

Charlotte said: ‘She was really positive, happy, she always had a smile on her face. Very friendly, bubbly, full of life. She would light up a room and many people have said that you would not have forgotten her if you met her.

‘She was just that kind of character.’

Charlotte revealed that Sophie started complaining of feeling unwell around July 2020, saying: “She was complaining of stomach pains, feeling sick and struggling to eat in the morning when she woke up.”

‘That was on and off since July and more consistently in August. He started bleeding and we had seen the GP before that but was told it was something else.

Charlotte told presenters Philip Schofield and Holly Willougby (pictured left) that she was previously unaware of the symptoms of childhood cancer.

Rhabdomyosarcoma is a type of soft tissue sarcoma (tumor).

Fewer than 60 children are diagnosed with rhabdomyosarcoma in the UK each year. Most of them are under 10 years old. It is more common in boys than in girls.

“You hear childhood cancer is rare, so as a parent you think if it’s rare, it’s never going to happen to us.

‘You think about all the other signs and symptoms, and you think, ‘Oh, it’s going to be other things.’ I now know that one in 450 children has childhood cancer. It probably would have been different.

‘She had some of the real red flags. Abnormal bleeding is definitely a red flag, stomach pain and constant stomach aches were another, and that nauseous feeling.

‘We know that all children feel sick, but it is the persistence of it. Those were all the flags, but I didn’t know the signs and symptoms.

‘I asked a lot of people: ‘Do you know if your child had cancer? Would you know the signs and symptoms to look out for?’

Sophie initially hid the bleeding, which began while staying with her grandparents for the summer, because she felt ashamed.

Host Philip Schofield told viewers how Charlotte took Sophie to A&E after being unhappy with her GP’s diagnosis.

Charlotte continued: “They asked me at the hospital, ‘How long have you had this lump?’ and I said “What lump?”.

Charlotte said a 12cm tumor was found in Sophie’s abdomen once she was taken to the ER, after her GP misdiagnosed her symptoms.

They found a 12 cm tumor in her abdomen. The abdomen is a rather difficult area to locate.

Philip admitted he couldn’t “imagine how awful” it would have been to see Sophie rushed into surgery.

Due to covid, mother and daughter had to spend weeks away from Charlotte’s other two daughters and Sophie’s father, Gareth.

Charlotte said: “They told me it’s cancer and they managed to remove 95 per cent of the tumor, but they couldn’t remove all of it, so we started chemotherapy.”

“She was pretty convinced they were going to upgrade her. She kept saying ‘”Doctors make you feel better and I know they will for me”.

“He just had that positive outlook the whole time. She painted pottery while she was in the hospital because she wanted more toys and activities.

Charlotte said that Sophie did not want to be left alone and would wonder why the hospital was feeding her.

Charlotte revealed that making a change for other families who have a child with cancer was top of Sophie’s wish list.

The life plan was written after Sophie underwent several surgeries, chemotherapy and radiation therapy, but relapsed.

“She wanted the parents to be fed and she was like, ‘Why don’t you get fed, Mom? You’re here and you don’t have a choice. You’re here because I’m sick, why are you here? Aren’t you fed?’ .

Charlotte explained that the 10-year-old girl did not want to be left alone, so she did not leave her side to eat.

“I know there are parents right now who won’t eat because they won’t be able to leave or because they can’t afford to eat in the hospital,” she added.

Charlotte said she will go to parliament to campaign for faster diagnosis of childhood cancer and a national campaign to raise awareness of the symptoms.

‘They need to be diagnosed faster, we know that the result if they are diagnosed earlier is better.

‘We want a national campaign on the signs and symptoms of childhood cancer, to make the public aware, along with training for GPs and nurse practitioners, because once they qualify there is no current childhood cancer course they can access. . There is a big loophole in that.

Charlotte admitted that she was surprised by the large number of people who watched Sophie’s funeral online after her death on September 18.

A tiara previously given to Sophie by Holly Willoughby was placed on top of her coffin.

Charlotte said her other daughters, Amelia and Lucy, are struggling with the loss following Sophie’s funeral on September 18.

Charlotte explained that they had started blogging to keep their friends and family up to date on what was going on, but it got much bigger.

Charlotte said: ‘It gave us comfort. When I asked her about her blog, she said, “Yes, I want to be famous,” and she understood, but she felt it for the wrong reason.

“I don’t want any parent to be in our position to have to sit back and watch their child die, knowing if research has been done and investment for cancer has been made.

“There has been so little change in sarcomas and brain tumors in decades and this needs to start to change.”

Charlotte revealed that her daughters Amelia, 9, and Lucy, 15, are struggling with the loss of Sophie.

“Amelia probably struggles the most externally, it’s hard to see your sister there and then they die and you live,” she added.

Viewers admitted they were “heartbroken” by the segment as they tweeted words of comfort for Charlotte.

One person wrote: ‘It’s unimaginable for a 10 year old to have a wish list. Sophie sounds like she’s a wonderful girl.

Another said: ‘To the mother speaking on #ThisMornng about her beautiful daughter’s fatal cancer: You and your daughter are absolute superstars. Best of luck on Tuesday in Parliament.