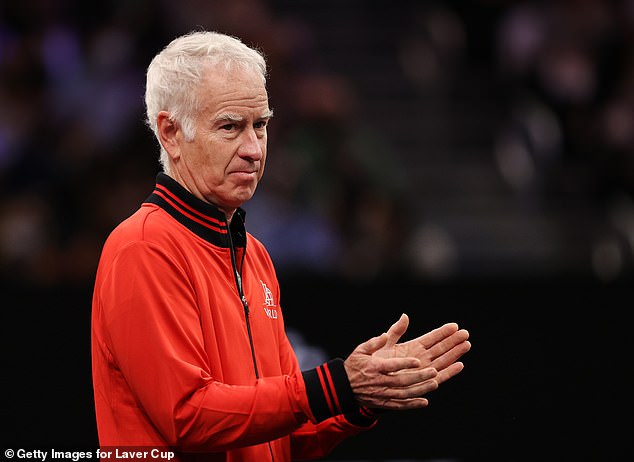 The All England Lawn Tennis Club (AELTC), which organizes the largest grass court, decided to ban players from the two countries for this year’s championships due to Russia’s invasion of Ukraine, which Moscow calls a ‘special operation’.

Belarus has been a key staging area for the invasion.

The AELTC’s decision was described as ‘discriminatory’ by the men’s ATP and women’s WTA and in response they removed qualifying points for next month’s tournament.

Banning Russian and Belarusian players from this year’s championships was the only viable option under guidance provided by the British government, the AELTC said last month.

McEnroe, who claimed three of his seven Grand Slam titles at Wimbledon, said there was no winner in the fight.

Tennis legend John McEnroe says he thinks Wimbledon made a “mistake” by banning Russian and Belarusian players from this year’s tournament, but the ATP and WTA shouldn’t have scrapped Slam ranking points.

Players like the Russian Daniil Medvedev, the number 2 in the world, will not be able to compete in SW19

‘It was a mistake (ban Russian and Belarusian players). I know it’s a very horrible, complicated and obviously terrible situation in Ukraine,” the 63-year-old told Reuters.

And no one else has made that decision. I think there was something with the government? I don’t know exactly. I wish that wasn’t what they did. And I wish the ATP and WTA didn’t decide, let’s just say there are no points right now.

‘It’s like a lose-lose right now. Tennis players, we are like a fraternity. We travel the world. And even if we speak different languages, there is a connection. And in a small way, it’s like a family. And we have to support each other.

“It’s hard to see some of our best players not playing for something they have nothing to do with. So I hope it gets resolved. I don’t know. But it’s a bad situation.

The Wimbledon ban rules out Russian men’s world No. 2 and US Open champion Daniil Medvedev and seventh-ranked Andrey Rublev from competing in the June 27-July 10 tournament.

Wimbledon organizers were concerned that a Russian player who won the tournament might have been used as propaganda by Vladimir Putin’s regime.

Aryna Sabalenka, from Belarus, is another player who will not be able to participate in Wimbledon this year.

Ranking points determine a player’s ability to participate in tennis events and receive seedings, so removing them from Wimbledon effectively reduces the event to an exhibition tournament.

Players will also be unable to defend the points they earned last year at Wimbledon and will drop down the rankings.

McEnroe described the situation as ‘lose-lose’

Japan’s four-time Grand Slam champion Naomi Osaka said last week that she was “not 100 percent sure” about playing at Wimbledon without the ranking points.

“I see all the players going to Wimbledon, but that depends on each individual,” added McEnroe, Eurosport’s tennis expert.

“The fact that there are no points, I don’t agree with that, but I don’t think that stops people, players, from going to Wimbledon.”

“We’ll know in a few weeks, but I think all the top players who think they can do well there will continue to play.”

It came a week after McEnroe clashed with former British No. 1 Tim Henman over the issue in an awkward television debate.

“I’m going to go after Mr. Henman because I think it was a mistake for Wimbledon to do what they did in the first place, kick out the Russians and Belarusians,” McEnroe said.

“If the players really believe that Wimbledon made a big mistake by not allowing Russian and Belarusian players to play, in my opinion they should have boycotted the tournament.”

He then added: ‘By the way, Mr Henman, we could share in the players’ winnings. How about 50/50 with the All-England club now that we’re on the subject of that?

Henman chuckled and said there were “no winners” from the Wimbledon decision and admitted he had sympathy for the Russian and Belarusian players but said it was unrealistic to expect officials to go against the government given its strict stance on Russia. he said.

John McEnroe and Tim Henman engaged in an awkward television debate over Wimbledon’s decision to ban Russian and Belarusian players from its tournament.

‘I don’t know how the Belarusians came up with it too, but that’s another story. In my opinion, compounded by the fact that now the ATP and WTA say there are no points now, I don’t see how that helps the players.

“The reality of the situation is that there are no winners and I have enormous sympathy for the Russian and Belarusian players who cannot play,” he said in response.

“When you go through the circumstances presented at Wimbledon, the government directive is that players cannot play as neutral athletes, like on tour at the moment.

“So the question instead is if Wimbledon is expected to change, given its status in the UK, and tell the government that we actually think we know better, then will we do something different?

Wimbledon is not going to jeopardize the safety of its players or their families, and that’s before we talk about the propaganda of a Russian or Belarusian player receiving the trophy on Center Court potentially in the second week.

“The first two options are horrible and the third option is not to invite Russian and Belarusian players and that’s not very fun.”

McEnroe concluded the chat by adding, “It seems like everyone loses.”