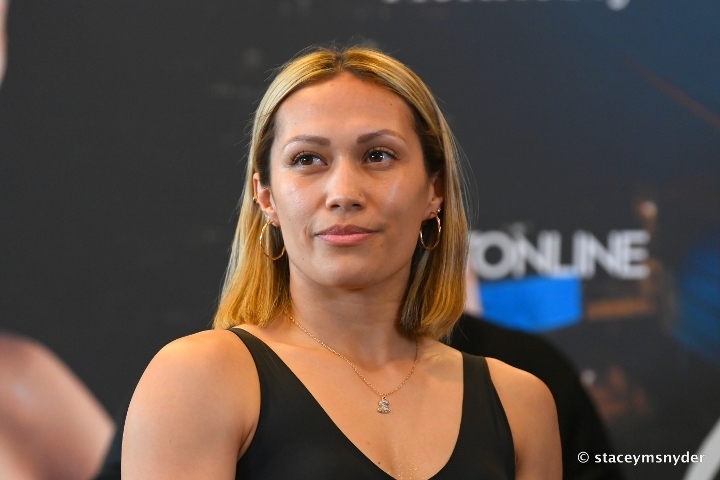 The concerns raised by Seniesa Estrada have been heard loud and clear by the upper echelons of Golden Boy Promotions.

However, there is confusion as to how things managed to get to this point.

East Los Angeles’ Estrada (22-0, 9KOs) has expressed in recent weeks his discontent over the payment offered for his next appearance in the ring. No fight date has yet been set for the reigning two-division WBA strawweight champion, who fought by fourth-round knockout of Marie Santizo in San Antonio. Estrada remains unsure when she will return to the ring, and she noted that she needs to work things out with Golden Boy, who she signed with in 2018.

Those on the other end of the conversation expect it to be as easy as correcting that part.

“I can assure you there is no dispute on our end,” Eric Gomez, president of Golden Boy, told BoxingScene.com in response to a recently published story citing Estrada’s frustrations over his current inactivity. “We have offered her a couple of fight dates and we are waiting to hear from her. We have an upcoming show (May 14) that he was offered to appear on, but he passed on the fight.

“Now we are waiting to find out if he wants to fight on our July show. We are not going to negotiate through the media, that is not how we operate. But she has our offer for the fight which we think is very fair and beyond her best payday. It’s up to her to decide.”

Arroyo is locked in for a title consolidation rematch with Julio Cesar Martinez (18-2, 14KOs) on a Matchroom Boxing card on June 25 in San Antonio. Esparza is coming off the best win of her career from a different part of San Antonio, outpointing Japan’s legendary Naoko Fujioka in ten rounds to unify the WBA and WBC flyweight titles on April 9 at Alamodome, a fight in which Estrada participated as part of DAZN. transmission equipment.

Estrada’s last two fights were in support of shows headlined by Gilberto ‘Zurdo’ Ramirez, including his effort to win the WBO junior flyweight title over Tsunami Tenkai on July 9 at Banc of California Stadium in Los Angeles. Angels. The two were paired up again for a show on December 18 at the AT&T Center in San Antonio, with Estrada scoring a knockout victory to cap a 2021 Fighter of the Year nominated ring campaign.

Golden Boy had hoped to have Estrada as part of the May 14 show headlined by Mexico’s Gilberto ‘Zurdo’ Ramirez (43-0, 29KOs) in a WBA light heavyweight title eliminator against Germany’s Dominic Boesel (32- 2, 12KOs) at the Toyota Arena in Ontario, California. An offer that Gomez only described as “generous” was rejected by Estrada, who feels his price should match his pound-for-pound talent.

The hope now is to get her back in the ring for a July show in the works. Golden Boy didn’t commit to the lineup, though undefeated lightweight contender Ryan Garcia (22-0, 18KOs) let it slip while attending the blockbuster Katie Taylor-Amanda Serrano event at Madison Square Garden that he plans to return on June 16. July. Estrada was also in town for the superfight, having set a “by July” deadline for his next fight.

It seems that everyone agrees on the timeline. The hard part is yet to come, though Golden Boy is hopeful it will be as simple as coming home and putting pen to paper.

“We are very proud of all that Seniesa has achieved. We are all from ‘East Los’ and it means a lot that he won his first two world titles with us,” Gomez notes. “We want her to be a part of our July show, but we can’t force her to fight. Not that we’re not being fair, but it’s up to her to decide if she’s ready to come back. The offer is there when she wants it.”