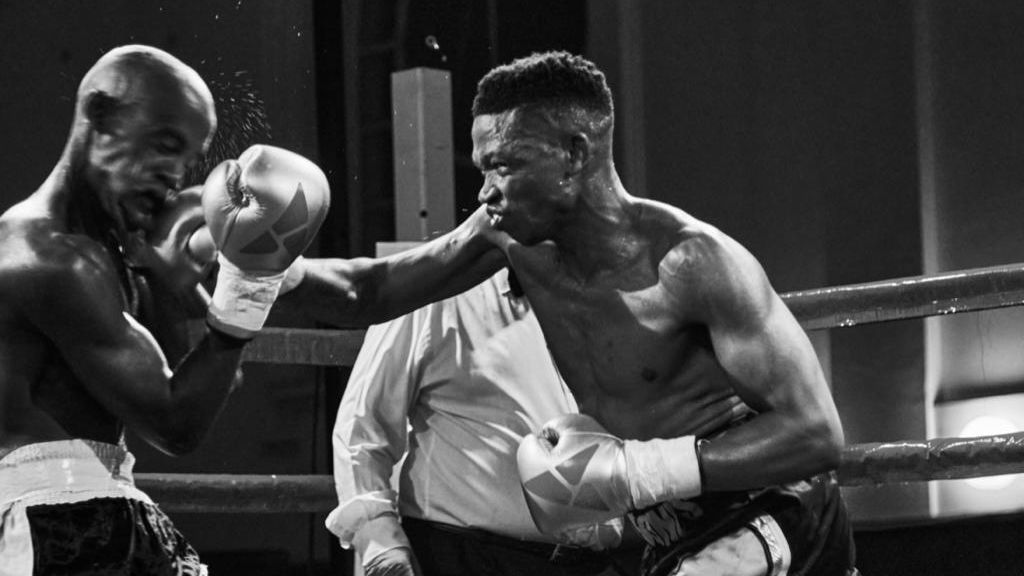 After Mzuvukile Magwaca was shot in the leg, his femur held in place by strips of skin, the boxer says he lay on the floor of his house and listened as his assailants debated whether or not to shoot him in the head.

At the time, in 2018, ‘Old Bones’ was just two fights away from a bantamweight world title, and he was one of Africa’s brightest boxing prospects. Minutes after arriving home to find intruders there, his career, and possibly his life, seemed to be over.

But he will make a miraculous comeback on April 21 at Africa Boxing 16 in Johannesburg, his first professional fight in four years. Since his femur was reduced to shrapnel, the fact that he can even walk to the ring, without limping, is a victory.

Magwaca, who was born in East London, South Africa, was in a good place. He was the IBF intercontinental bantamweight champion and his partner had just given birth to his child. He then he came home to chaos one night.

“I have been [coming home] from the hospital to see my newborn [child]. When I got home, my security gate was open. When I went in there, I found three guys. One was carrying a large gun and the other was carrying knives. They demanded money and my TV and my clothes, everything,” Magwaca told ESPN.

“I did not refuse to give them what they asked for. They took everything they wanted, all my belongings. Then they asked me for the TV but unfortunately it was mounted on the wall so they couldn’t get it out.

“On the way out, they decided to shoot me.”

The instant the bullet shattered the bone just above Magwaca’s knee, he braced himself for ramifications.

“I realized the seriousness of the wound the moment I was shot. The first thing that came to mind was that my boxing [career] was over.

“It was as if I had been run over by a truck… the wound was very bad. Remember that the bone was totally broken, so my leg could only hold [together] through the skin,” he said.

He then lay fully conscious and listened as the robbers deliberated over whether or not to take his life: “I heard their voices, these guys were saying, ‘I think we should finish him off; shoot him in the head and get this over with.” .'”

But instead of shooting him again, they locked him inside the house and stole his car. He yelled for help until his neighbor arrived.

To this day, Magwaca does not know who the thieves were and no arrests have ever been made.

Going back to booze, and then a helping hand

Although he was lucky to survive and receive treatment at Tygerberg Hospital, the trauma of the shooting began to take its toll and Magwaca turned to alcohol.

“It was a lot of stress and pressure. I was drinking because I didn’t want to think about it,” Magwaca admitted.

“Seeing people you were training and boxing with going to the gym and packing their bags when you can’t go to the gym because you’re on crutches… it’s going to hurt a lot.”

Even when Magwaca relearned how to walk, there were days when it was hard to find a reason to get out of bed: “[Alcohol was] the only thing that could help me get out of stress”.

Three years ago, the Pride Fighting Academy (PFA) handed him a lifeline and brought him on board as a trainer. At the time, PFA chief Michael Mouneimne had no idea that Magwaca was still capable of boxing, but he was surprised.

Mouneimne told ESPN: “When he got here, his leg was in really bad shape. He had a really bad limp and couldn’t keep his balance, but he’s a tough guy with a great work ethic.

“Although I would say everything [was] Well, you could tell he was in pain. Once we got to know each other a bit, we started chatting. I saw that there was still that fire for boxing.

“I told him, ‘Listen, let’s hit some pads and see what you can do.’ We put some gloves on him and started hitting some bags. Every day, we did 15 or 20 minutes.

“Then over time we got to the point where we started sparring and playing and we thought… we can do this again. So we started talking to the physios in the gym and Max [Linley] from the Waterfront Physiotherapy Clinic said she would work with him and rehab his leg.

“We got to the point where he started training every day, shadow boxing and moving around. He got better every day.”

It took years of work, but in December 2021 Magwaca fought his first fight since the shootout, beating Nkcubeko Jacob via second-round knockout in an exhibition fight.

Magwaca said of that return to the ring, “I thought it was going to be a little rusty or something, but it felt good because I trained a lot with the guys in the gym. I worked very, very hard for it.” Fight. I went there and it was fine. I wasn’t nervous…maybe just a little nervous, but I wasn’t rusty.”

As he prepares for his professional comeback, against Sanele Maduna on Thursday, Magwaca insists he has put his past behind him, despite not having had the help of a psychologist.

“I don’t feel angry about the guys who shot me. I don’t know if they’re going to be arrested or not, the case just went away.”

“I advised myself. I let that happen and now I’m focused on the future.”

As for whether Magwaca can get back to his pre-shooting career heights, or if that’s even important given the amazing comeback he’s made through it all, Mouneimne is hopeful.

He said: “I think he’s got the fire and the work ethic for that. We haven’t tested his leg in a pro fight, but he’s doing all the rehab and strength and conditioning training. He’s in great shape, has been strong.

“We’ve done everything we can to get him ready for this fight. We’ve taken him to outside gyms to train where the guys have been pushing him and testing him. He’s coming through the fight with flying colors, so I don’t see why he wouldn’t.” well in his professional debut.

“We’re taking it one fight at a time and we’re not going to look too far ahead, but I think if he does well in this fight and his body holds up, his leg holds up and he’s got that fire burning, we’re going to see another one.

“If he gets through this relatively well, I don’t see why he can’t be competitive.”