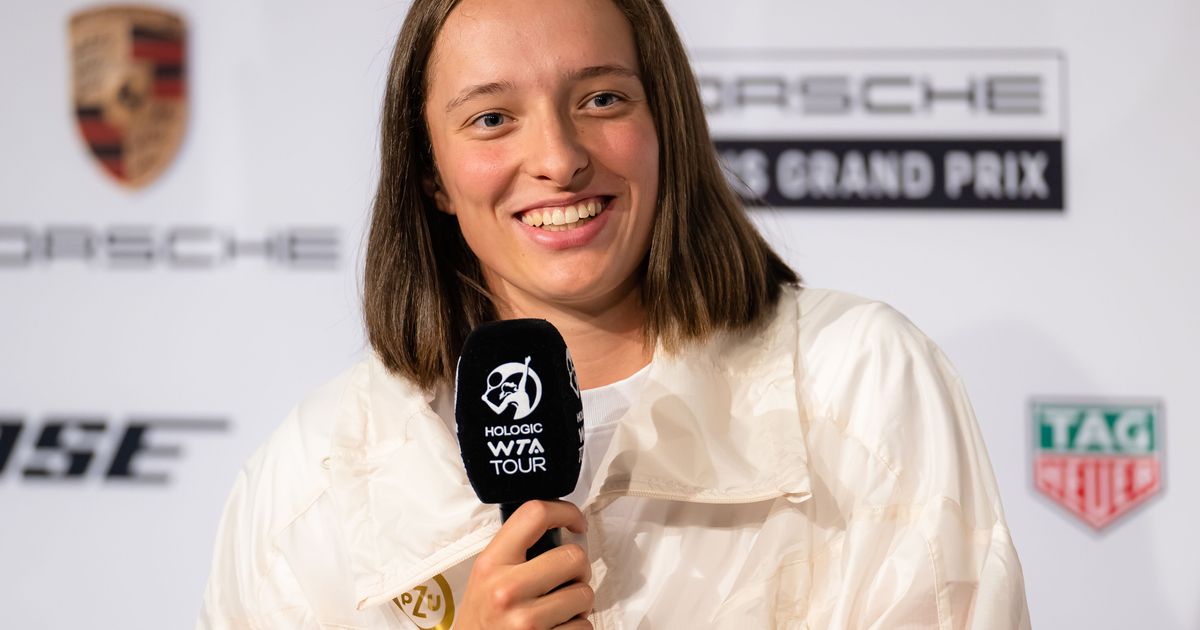 STUTTGART, Germany — For Iga Swiatek, Paula Badosa and Maria Sakkari, a clay court feels like a second home. So you can understand the excitement of all three as the tour embarks on its final turn.

For Swiatek, the clay was home to her first WTA final at Lugano 2019. A year later, she won Roland Garros without dropping a set.

Sakkari also won her first WTA title on clay, at Rabat 2019, and made her first major semi-final last year at Roland Garros.

“I had a week off after Miami, so that really helped me get back on the tennis court, excited for the clay court season,” Sakkari told reporters at Media Day at the Porsche Tennis Grand Prix, where she is No. 4 seed. “I have to be absolutely honest, this is probably my favorite swing of the season and I feel good about it.”

Badosa has enjoyed a strong start to the season on hard courts, winning the title in Sydney and reaching the semi-finals in Indian Wells and quarter-finals in Miami. “Well, the expectations are always high now at the level I’m at, but I want to be very focused on the day-to-day, enjoy it,” Badosa said. “It’s going to be very hard.

“Everyone knows clay is my favorite surface, but that also makes it tricky because maybe they think you’re even more of a favorite and now they play better against you.”

Seeded number 2 in Stuttgart, Badosa has already felt the effects of being a favorite on clay. In her first clay court tournament of the season, she was tested during her run to the quarterfinals in Charleston, where she lost in three sets to eventual champion Belinda Bencic.

“On clay, I have to be honest, I only played one tournament and I was surprised because I saw everyone play very, very fast,” Badosa told WTA Insider. “Maybe a few years ago, it wasn’t like that. So I think tennis is changing. It’s always an evolution. And I think it’s changing because people are stronger, they move better and they hit harder, even harder.” and bigger. It’s getting very fast.

“So I’m adapting. I see players adapting as well. They’re getting a lot better at it. So I’m going to have to get better at serving bigger, returning really fast too and playing fast like them.” “

Sakkari: “I have been training on clay for the last two weeks. This is my favorite swing and I feel good about it.

“I expect the first two matches to be a bit rusty, not feeling my tennis at the highest level, but I’m sure it will get there.” #PorscheTennis pic.twitter.com/Pv9mqWBs4c

Sakkari agreed. Gone are the days when a purely physical style of play guaranteed success on the surface. Players who grew up on clay find it necessary to bring the same aggressive mindset to clay that they employ on hard courts.

“I think on clay, you have to be very athletic and fit because the points are long and the matches can go long,” Sakkari said. “I like to hit my forehand hard and with spin, but there’s not much difference in style of play than playing on a hard court because you still have to be aggressive. Everybody is going to go out and hit hard.”

“So I’m just making little adjustments, like the height over the net on both shots, but I’m still trying to get really close to the net, and maybe kicking the serve a little bit more depending on who I’m playing. But I’m still looking for my serve and after my shots.

This clay court season promises to be especially interesting for Swiatek and Badosa. Both players broke new ground in their hard court games this season by adjusting their games to the faster surface. When asked how those adjustments might alter their approach to clay, both players took a wait-and-see approach.

“I mean I’ve been playing on clay for two days, so I don’t know,” Swiatek said. “But for sure having more variety and being able to attack and also being able to play the same type of tennis that I was playing last year, like higher top spin, having these two options is really helpful because I can adjust and pick the best type.” game to play against my opponent.

“Honestly, I think I can do both and the biggest challenge is going to be choosing the right tactics or the right skill. So now I feel more confident and I feel like I have more options. It’s kind of like it was on hard court.”

Badosa: “We push each other a lot and she’s nice. In my practice, if I have to go with bad vibes or bad energy, I would not like it. She makes everything very easy.

“That’s a tough question right now because I’m still figuring myself out so I don’t really know how I play.” [on clay]Badosa said. “I know I play well off the baseline, I have big shots, I try to be aggressive. But at the same time, I’m trying to find this balance of good movement, defending well. I try to be solid and find that balance, to be solid but also aggressive.

“What I know 100 percent is that I am a fighter. I try to fight every point, every match, no matter what.”