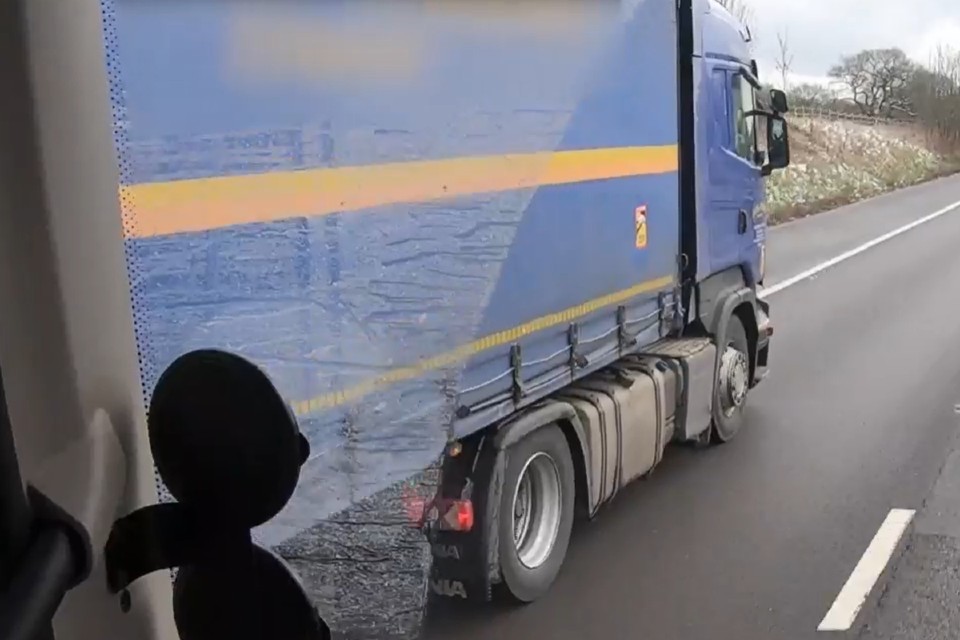 But what he didn’t realize was that the vehicle he nearly collided with was an unmarked Highways England ‘supercab’. – and there were two police officers inside.

Near accident as a driver on the phone behind the wheel

The recent images, taken on the M40 by Warwickshire Police, capture one of more than 21,000 offenses recorded by officers in Operation Tramline HGV taxis since Highways England launched the national security initiative.

In another forcibly captured clip, a trucker is seen looking down and texting on his phone as he travels down the freeway. When he sees the cops in the next lane, he just shrugs and gives a thumbs up.

Driver texting is caught on camera

While a car driver, unaware of the police officers in the HGV cab next to him, has a mobile phone in his right hand in this incident, until he hears the police siren behind him and hangs up the phone.

Highways England HGV taxis are now being used as part of a multi-agency Week of Action on the M6, taking place from Monday 24 May to Sunday 30 May, which aims to reduce the number of incidents on the motorway and highlight the risks of dangerous driving.

Under the slogan of Operation Vertebrae, the campaign takes place along the M6, the longest motorway in the country. Highways England deals with around 180 reported incidents on the M6 ​​every day. These include a large number of traffic collisions with 4,222 reported on the M6 ​​in 2019.

Since the launch of Operation Tram in 2015, more than 21,600 offenses have been recorded. The most common crimes have included:

Operation Tramline taxis are an important part of our commitment to tackling dangerous driving and those who take unnecessary risks with their own safety and the safety of others on the road.

The number of people found using their mobile phone while driving is quite alarming. You are four times more likely to get into an accident if you use your phone and if you are caught you face a £200 fine and six points on your licence.

Through this week of action on the M6, we want to make all our roads safer by raising awareness and encouraging motorists to consider their behavior behind the wheel.

From their elevated vantage point in the cabs of unmarked HGVs, police officers can spot dangerous drivers regardless of the vehicle they’re in.

Incidents witnessed during Operation Tramline included a driver driving a lorry on his knees while having lunch on his lap and also using his phone in the East Midlands. While in West Mercia, officers saw a driver eating lasagna with a knife and fork as he drove down a freeway.

Surrey Police saw one HGV driver boiling a kettle on the dashboard and another eating pickled gherkins from a jar with his elbows on the steering wheel.

A driver was caught twice in one day, in the morning and in the afternoon, using his mobile phone while driving on the A38 in Derbyshire.

Consequences for drivers range from warnings to fixed penalty notices, court citations or even arrest. As well as supercab patrols, partners taking part in the M6 ​​Action Week will be present at motorway services offering advice to drivers on what to do in the event of a breakdown and ensuring cargo safety.

Vehicle controls will also be carried out with the participation of the DVSA, the Health and Safety Executive and the Ministry of the Interior. Six forces are involved in Operation Vertebrae: Cumbria, Lancashire, Merseyside, Cheshire, Warwickshire Police and the Central Motorway Police Group, as well as the North West Commercial Vehicles Unit.

Operation Tramline is a successful collaboration between the police and Highways England.

We remain committed to addressing those who take unnecessary risks to their own safety and the safety of others on our roadways by allowing themselves to be distracted while driving. The consequences of these actions are often devastating. We will continue to work together with Highways England on Operation Tramline and prosecute drivers who ignore the risks.

DVSA’s priority is to protect everyone from unsafe vehicles and drivers. We are delighted to be part of this key road safety exercise. During the week, the DVSA will carry out safety checks on caravans and small trailers, as well as our normal inspections of commercial vehicles and drivers.

Many caravans and small trailers have been parked over the winter, so we urge drivers who are new to trailer driving or who haven’t towed in a while to do a few simple checks.

The DVSA caravan and small trailer checks, which we will carry out as part of Operation Vertebrae, should take around 20 minutes each. We will review safety features including lights, tires, safety cable, and brakes. If a caravan or small trailer is unsafe, the driver will not be able to continue their journey until the defect is fixed.

Employers must ensure that drivers, other workers, and members of the public are safe when vehicles are used for work. There are legal requirements for employers to have robust procedures in place to manage vehicle safety, including ensuring proper procedures are in place, providing workers with proper training and equipment, maintaining equipment and vehicles, and supporting workers. drivers when raising concerns.

Members of the public should contact the Highways England customer service center on 0300 123 5000.

Journalists should contact the Highways England press office on 0844 693 1448 and use the menu to speak to the most appropriate press officer.