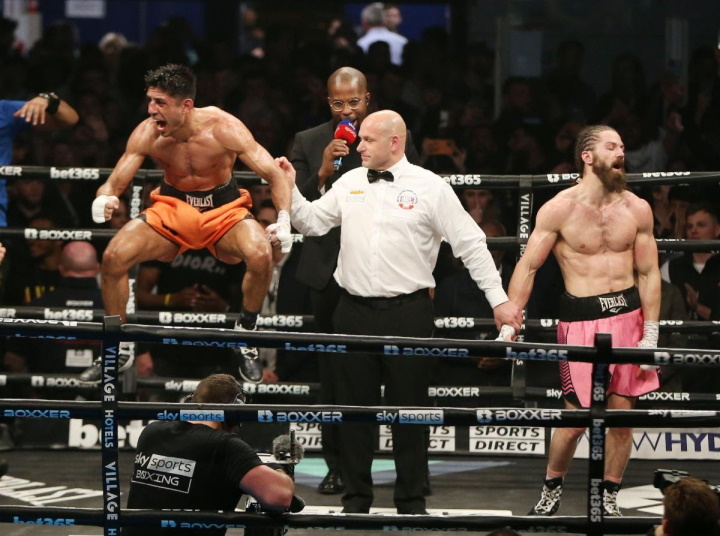 Hometown hero Dylan Cheema (5-0, 1 KO) emerged as the winner of tonight’s BOXXER Series lightweight tournament as he defeated Rylan Charlton (9-3-1, 4 KO) by unanimous decision to claim the prize. of 40 thousand pounds. at the Skydome Arena in Coventry, live on Sky Sports.

However, the former world kickboxing champion from Coventry did not have an easy road to the final as Cheema had to fend off the likes of Scott Melvin (5-1, 1 KO) and Otis Lookman (1-1, 1 KO). in the path.

The final was an all-out war from the opening bell, both men landing powerful shots that made everyone in attendance grimace. The pair were feeling the effects of previous fights and were breathing heavily at the end of the round. He asked the question of who was hungrier to win.

Cheema and Charlton traded numerous blows in the second round, and at times it looked like Charlton was on his feet, but he continued to muster the energy to hit Cheema.

Cheema’s route to the final was very difficult and he entertained his home crowd in Coventry. After an explosive first-round knockout victory over Otis Lookman in the quarterfinals, Cheema faced Scott Melvin in the semifinals, which was easily the fight of the night until the final.

Melvin looked comfortable during the second round against Cheema, he wasn’t afraid to put himself on display in front of the Coventry crowd that night. However, it was Cheema who was throwing the most convincing punches.

The final round wowed the crowd when both fighters bit into the gum guard and came out pounding. Melvin was able to dodge some of Cheema’s frontal attacks, but found himself on the back of many hard shots that made all the difference to the judges at ringside.

Melvin’s journey to the semi-final against Cheema was a difficult one for him personally, as he faced fellow stablemate Tion Gibbs (8-1, 0 KOs), who is primarily recognized as the brother of series champion Cori Gibbs. Liverpool Boxers.

Before Charlton joined Cheema in the final, he stopped the experienced Shaun Cooper (13-4, 0 KOs) in the final round of their semi-final encounter. Charlton was a handful in every fight he participated in on the night with his super aggressive fighting style, living up to his nickname ‘The Pint Size Powerhouse’.

Cooper was able to stay on the back foot at times and hit long, looping shots over the top of Charlton’s guard, who stayed consistent on the front foot. A brutal body shot landed in the final round that saw Cooper fall to the canvas in agony and wanting no more.

Bookies favorite and Sky Sports Boxing regular Charlton defeated Nottingham fighter Joe Underwood Hughes (7-1, 1 KO) before his semi-final appearance in a grueling quarter-final clash that could have gone In any direction.

Charlton stayed ahead for all three rounds with Hughes doing a fantastic job of keeping up with his man after the attack.

Shaun Cooper, who previously held the WBO junior lightweight title, took on 22-year-old Brooklyn Tilley (3-1, 0 KOs) in the final quarterfinal of the night in Coventry.

Spurred on by his loyal fan base, Tilley struggled to convince the judges at ringside when Cooper raised his hand and his name was reserved for the semi-final with Charlton. The judges scored it 29-28 all in favor of a split decision victory for Cooper.

The BOXXER series returns to Sky Sports next month when the tournament arrives in Sheffield on May 21, showcasing eight hungry cruiserweights awaiting their moment to shine.