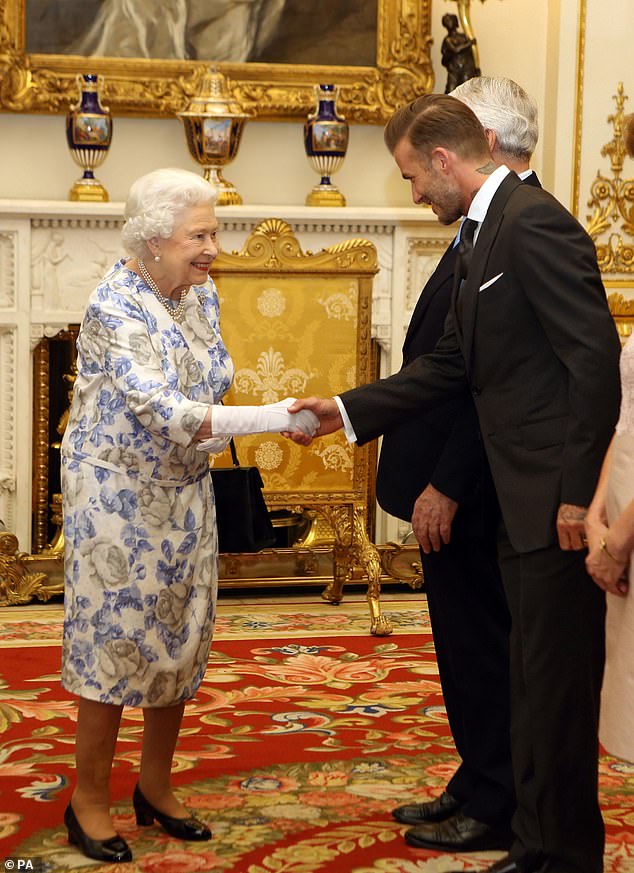 david beckham was mocked by fans after sharing a gushing tribute to the Queen on Jubilee weekend, while joking that he was “still trying to get his knighthood”.

The former footballer, 46, who was in the running for the accolade in 2014 until a ‘red flag’ warning from HM Revenue and Customs scuttled his nomination, was finally given the green light after his finances were cleared up.

And after the news broke, David’s fans joked that he was in good hands with the Queen by sharing a tribute to his 70-year reign in an Instagram post on Thursday.

Celebration: David Beckham, 47, paid tribute to the Queen with a gushing post ahead of her Platinum Jubilee on Wednesday (pictured together at the Young Leaders Awards in 2016)

David shared a number of photos on his page, including one of him with Her Majesty at her Young Leaders Awards in 2016.

She also posted photos of the Queen at various times in her life and wrote, “Today we celebrate our Queen’s Platinum Jubilee.” 70 years of service and inspiring leadership of our country.

“Let’s get together and commemorate his remarkable reign with a great British party in the coming days.”

Gushing: Alongside the photos of the Queen, you wrote: ‘Today, we celebrate our Queen’s Platinum Jubilee. 70 years of service and inspiring leadership of our country’

Many took David’s post as an opportunity to take a subtle jab at the Inter Miami owner, with one person joking: ‘Even after Knighthood Becks?’

While another jokingly joked, ‘She’s not going to become a knight, mate…’

A third added: “You won’t get knighted, let it go.”

Other posts followed a similar pattern, as they joked with the star amid claims that he will finally be awarded the much-desired knighthood.

Sun stated last year that David has been formally nominated and moved to the official list of recommendations in June.

In 2014, David was on the brink of becoming a Sir in the New Years Honors list until a ‘red flag’ warning from HM Revenue and Customs scuttled his nomination.

David’s involvement in an alleged tax evasion scheme had dashed her hopes.

Iconic: David’s posts included images of the queen as a child and photographs taken during the early years of her reign as head of state.

Proud: David, who was awarded an OBE in 2003, is finally in line for knighthood (pictured with his OBE and Victoria in 2003)

The former footballer was one of dozens of wealthy celebrities who invested in the controversial Ingenious Media scheme to finance movies and reduce investors’ personal tax liability. HMRC labeled the scheme a tax avoidance vehicle.

But a source has now told the publication: ‘David, like many of the celebrities involved with Ingenious, had no knowledge of what was going on at the time.

“His team first proactively approached HMRC almost two years ago when David spun off his business, and finally put it all right, once and for all, this year.”

Hopes: In 2014, David was on the brink of becoming a Sir in the New Years Honors list until a ‘red flag’ warning from HM Revenue and Customs scuttled his nomination (pictured in 2018)

They continued: ‘In 2013, David was told that the only reason he was passed over for a knighthood was because of the tax fiasco. Now that that’s cleared up, there’s absolutely no reason why he shouldn’t be honest.

“Obviously he’d be totally thrilled with a knighthood, but he’s under no illusions and he’ll only believe it when he sees it.”

MailOnline reached out to a representative for David for comment at the time.

Throwback: A source said: “Obviously he’d be totally thrilled with a knighthood, but he’s under no illusions and will only believe it when he sees it” (pictured in 2002)

The Duchess of Cambridge and her three children, Prince George, Princess Charlotte and Prince Louis, waved to cheering crowds at Trooping the Color on Thursday as the Queen’s Platinum Jubilee celebrations kicked off in style.

Three carriages left the forecourt of Buckingham Palace carrying members of the royal family down The Mall this morning, with the Duchess of Cornwall traveling alongside Kate Middleton and their children in the first carriage.

They were followed in glorious sunshine by the Earl and Countess of Wessex with their son James, Viscount Severn, and finally the Duke and Duchess of Gloucester and Vice Admiral Sir Tim Laurence in the third carriage.

Color Parade: Carriages left Buckingham Palace carrying the royal family down The Mall this morning, with the Duchess of Cornwall joined by Kate Middleton and their children.

Jubilee: The Queen’s Platinum Jubilee celebrations kicked off in style on Thursday