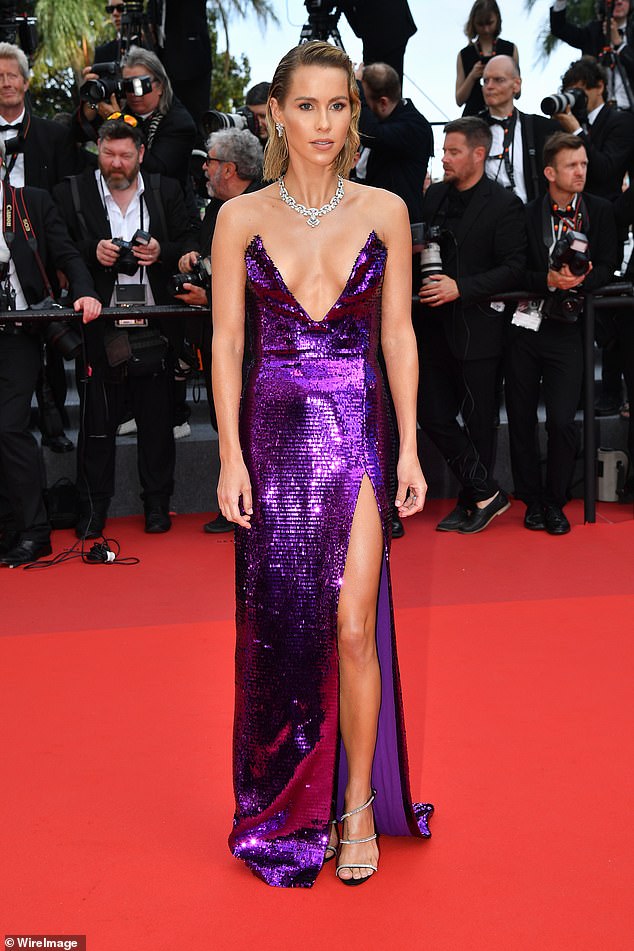 She is no wallflower when it comes to the red carpet.

And Australian actress Claire Holt made sure all eyes were on her as she attended the premiere of ‘The Innocent’ in cannes film festival on Tuesday.

You have something up front! The dress featured a dangerously low-cut sweetheart neckline that showed off her cleavage.

Stunning: She opted for a slicked-back, wet hairstyle to match her futuristic-style gown and her makeup was scaled back to show off her natural beauty

Leggy! Claire flashed her pins as she walked up the stairs to the Palais des Festivals.

The dress featured a dangerously low-cut sweetheart neckline that showed off her cleavage and a daring thigh-high slit.

Claire glowed with a deep tan and shimmery body makeup dusted over her cleavage.

The mother of two accessorized with a stunning Bvlgari diamond necklace and a pair of diamond cluster earrings.

Diamonds are forever! The mother of two accessorized with a stunning Bvlgari diamond necklace and a pair of diamond cluster earrings.

Details: The dress was embellished with purple rectangular sequins

It is shining! Claire glowed thanks to a deep tan and shimmery body makeup dusted on her cleavage.

She opted for a wet, slicked-back hairstyle to match her futuristic-style dress and her makeup was scaled back to show off her natural beauty.

Claire is best known for her roles in The Vampire Diaries, Pretty Little Liars, and H₂O: Just Add Water.

She is married to her husband Andrew Joblon and the couple share two children: a son, James, three, and a daughter, Ella.

The baby is back! Her strapless gown also drew attention to her very toned back.

The couple, who have been married for four years, shared a kiss in the attached photo.

In 2020, Holt opened up about the heartbreaking miscarriage she suffered before becoming pregnant with her children.

Star-studded affair: Claire was joined by various actors, models and socialites on the red carpet

Happy: The Brisbane-born star is married to husband Andrew Joblon and the couple share two children: a son, James, three, and a daughter, Ella

‘My miscarriage [was the hardest thing of my life]. I thought I could never have kids,’ the Pretty Little Liars actress confessed in an Instagram Q&A.

‘If you’re going through one, wait. There is hope,’ she said.

She shared a photo of herself in the hospital after undergoing surgery, writing in the caption that she felt “broken” after losing her baby.

Claire became pregnant with her son James five months after her miscarriage.

In September 2020, Claire and Andrew welcomed their second child, a girl named Elle.

The reality star shared the news with her fans on Instagram, writing, “She’s here.” Our sweet girl, Elle.

“After 27.5 hours of labor, she flew into the world and expanded our hearts. We are so thankful for our healthy baby boy and can’t wait for him to meet his big brother.”

Family: She became pregnant with her son, James, five months after suffering a devastating miscarriage. In the photo: Claire, Andrew and James

Claire married Andrew in August 2018, eight months after their engagement.

She was previously married to film producer Matthew Kaplan, who filed for divorce in April 2017, the day before their one-year anniversary.

A native of Brisbane, Claire is known for her roles on the American television shows The Originals, The Vampire Diaries, and Pretty Little Liars.