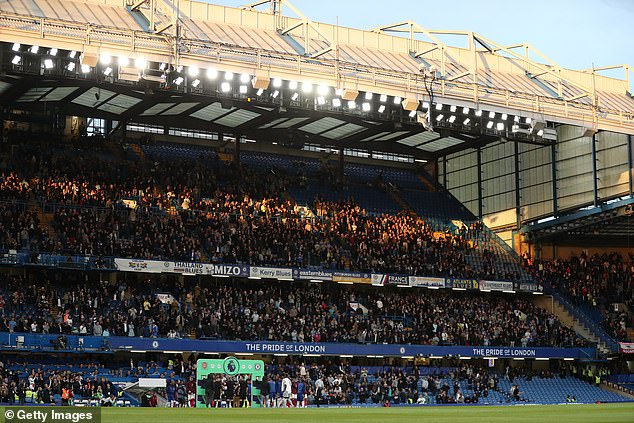 ‘There’s no one here’: Arsenal fans taunt Chelsea at Stamford Bridge in what is the first game affected by sanctions against owner Roman Abramovich with the crowd limited to just 25,000 season ticket holders compared to the capacity over 40,000

Chelsea’s attendance at Stamford Bridge has been affected for the first time since sanctions were imposed against owner Roman Abramovich.

The club is unable to sell match tickets due to sanctions imposed on its owner last month following the Russian invasion of Ukraine.

This is the first time that the punishment will directly affect a home game, as tickets for previous matches had already been sold.

The large number of empty seats was clearly visible as the match between the two London rivals began.

Chelsea’s match with Arsenal is the first to be affected since sanctions were imposed against its Russian owner Roman Abramovich last month following the Russian invasion of Ukraine.

Chelsea have more home games against West Ham, Wolves, Leicester and Watford this season, which could see a similar limitation on the number of supporters at Stamford Bridge.

The government’s decision to limit the size of the Chelsea crowd came after Abramovich was named among seven oligarchs to be hit with an asset freeze and travel ban under UK sanctions.

Abramovich has also put the club up for sale after 19 years in charge of the Londoners, with a decision on who takes over the club expected at the end of the season.

The government decided to ban Abramovich from completing transactions with UK individuals and companies due to his proximity to the Russian state.

Attendance at Chelsea’s match against Arsenal is the first to be affected since Roman Abramovich (pictured at a football match in May 2021) was suspended and the club was already selling tickets for matches before this one.

However, they have allowed Chelsea to continue, but under strict conditions designed to prevent Abramovich from profiting from the club’s activities.

As a result, the club will be able to finish the season as planned, but only a select number of existing ticket holders, including fans with season tickets, will be able to attend games.

The club should be able to sell tickets normally when the acquisition is complete.

Former Chelsea player Paul Canoville has expressed frustration that Chelsea have to play in front of a smaller crowd at Stamford Bridge.

Canoville took to Twitter to write: “Tonight we will see a large number of Chelsea members seats empty, while Arsenal will be allowed to fill the away section.”

‘Ex-players can’t even buy our two allotted tickets. These go to my Foundation to support our work @NadineDorries @nigelhuddleston @GregHands. This is nonsense #Chelsea.

He accompanied the caption with a graphic that read, “Everyone has the right to be stupid, but you’re using it as a privilege.”

Despite the lower attendance, manager Thomas Tuchel insisted this week that it would not be to the Gunners’ advantage.

He said: ‘It’s not an advantage. We want to play home games in front of a full stadium. The game is for the viewers and fans, so that’s really bad news. I was not aware of it.

‘Maybe someone told me and I forgot, this is possible, but let’s change things.

‘maybe all [the supporters] let us be aware of this and push a little more because we lack quantity but we must not lack quality of support. I can only remind everyone of the game against Leicester last season about the Covid situation – it was the first time spectators were allowed on the Bridge.

‘There were like 15,000 and all the players said it felt like a full stadium. Hopefully, we can be the spark that gets everyone into that frame of mind to give a little more than normal.”