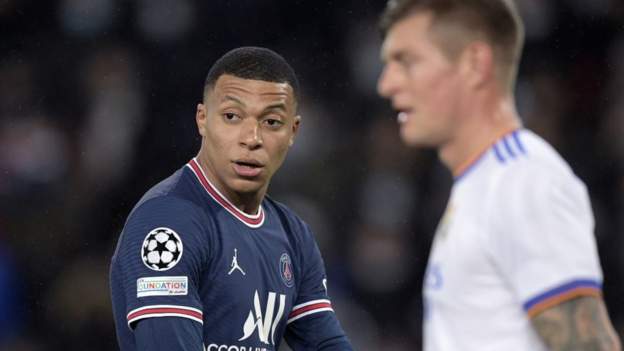 These were supposed to be seven dream days for Real Madrid.

Announce the signing of Kylian Mbappe, arguably the most coveted player in the world, at the start of the week and win the Champions League at the end of it.

That was the expectation of the president of the club, Florentino Pérez, who had been very confident that a deal would be finalized for the World Cup-winning striker in France.

that mbappe chose to stay at Paris St-Germain It hasn’t gone down well. The Madrid press has been apoplectic, to the point that earlier this week all the coverage was focused on the lack of agreement rather than the small matter of Saturday’s final against Liverpool.

The fallout has involved Karim Benzema controversy, but it may actually end up being good news for some of the Bernabeu club’s key players.

Either way, it certainly hasn’t been the build-up to their bid for a 14th Champions League title that Real Madrid had hoped for.

While Liverpool’s preparations for the Paris final have involved accepting the disappointment of missing out on the Premier League title by one point to Manchester City, the Real Madrid side have had to deal with an entirely different setback.

Certainly, there is an element of disappointment within their camp at not having signed Mbappé, as many in the group were looking forward to the opportunity to play him, not least because they had been assured his arrival was a done deal.

The Madrid media felt the same, and the main reason for the subsequent furor is that the only thing they had recently heard – or believed – was Pérez’s version of events.

According to sources close to the president, everything was agreed. Mbappé had begun to look for a property in Madrid, his presentation to the fans was already being organized and Pérez had said in meetings and private dinners that everything was done.

Perez told everyone that the player was counting down the days before his arrival and the rejection over the last eight months of a new contract offer from PSG only served to confirm his belief that this was the case.

But Mbappé always said unequivocally that he would make his decision at the end of the season.

Real Madrid told him that he had to choose between money and glory, and there has been a lot of talk this week that he chose money.

However, his motivation was certainly more than just financial.

Despite what you may have read or heard, in Mbappé’s mind he did not say “no” to Real Madrid, but “yes” to PSG and to stay in his native France. That became clear to me when I met him in Paris this week to interview him for BBC Sport.

In the end there was very little to choose from between the offers on the table from both clubs, and the player firmly believes he has unfinished business in Paris.

For the 23-year-old, money was of course a factor, but it’s also about love, which he has in abundance in Paris, and power, the three things humans crave. The player will now become the center of attention of the club and everyone will have to adapt to it. And yes, that includes Lionel Messi. Let’s see how that works.

Mbappe is also more than aware of the fact that at the end of his lucrative new contract he will only be 26 years old and presumably in his prime. Anything can happen then; never say Never.

Current Real Madrid star Karim Benzema is 37 and may not be at the club when that contract expires. Maybe that helps explain your strange instagram post of a photo of Tupac Shakur, with a background image of a ‘friend’ of the rapper who allegedly betrayed the artist before his murder in 1996. This was seen as an unsubtle signal to highlight Mbappe’s own ‘betrayal’. .

The two are France teammates, of course, and Mbappe was quick to point out that in his opinion this childish response had more to do with the powers that be at Real Madrid getting up to mischief than anything emanating from Benzema himself. .

Certainly Benzema has not been impressed by being involved in the saga and indeed needed his intervention to change the mood this week.

He effectively pressed the reset button on Tuesday during a Champions League press day, saying the time to discuss these minor matters was long past and now was the time to focus on the match.

There are two people involved in Saturday’s final who probably won’t exactly be heartbroken by Mbappe’s absence in Madrid, namely Vinicius Junior and Rodrygo.

Vinicius has played more minutes than any other Real Madrid player this season and has been a standout player in the Champions League. Rodrygo has been used less regularly, but he arguably delivered the European football moments of the season when he scored twice in the dying moments of their Champions League semi-final against Manchester City to keep the tie alive.

More support for Vinicius, who was incidentally told when he was 16 that the club looked to him rather than Mbappé as their future, is now inevitable. Suddenly his potential importance to the Spanish champions has grown significantly. Vinicius will probably benefit from not having to look over his shoulder.

As I write, new contracts are being negotiated for him and Rodrygo. They are not ‘an Mbappé’ either, but Real Madrid now realize that this is the layer with which they must cut the rag. They will no longer be able to compete in buying superstars and will have to go down the road of signing prodigiously talented youngsters, like the aforementioned couple and also Eduardo Camavinga, turning them into superstars.

The big question now is where does all this saga leave Real Madrid and its president off the pitch?

There is no doubt that it is time for a reality check for Pérez and the club as a whole. Neither man is used to coming second in transfer negotiations, but even they have to accept that the timing of these big deals is now in the hands of the players, because Mbappe’s handling of this situation – leaving his contract running out and waiting until the end of the season to announce his decision – has changed the transfer landscape.

Pérez is a supremely cunning leader with a killer instinct, and previous deals have shown the football world that what he and Real Madrid want, they invariably get.

The entry onto the scene of clubs linked to the state such as Manchester City (Abu Dhabi) and PSG (Qatar) has meant a radical change in European football. The pecking order has been transformed both on and off the pitch, with the game’s two young superstars choosing to entrust their futures for the time being to at least these clubs: Erling Haaland to Manchester City and Mbappe to PSG, rather than Real Madrid. Madrid and Barcelona.

Real Madrid’s inability to secure the Mbappe deal means that it has not only lost weight and prestige in the market in the eyes of the watching world, but more importantly, it has lost prestige. That is not a pleasant feeling for a club that is considered the most important in the world.

But having said all this, the disappointment of losing Mbappé should not hide the fact that Real Madrid continues to be very well managed, with a manageable debt despite the reconstruction of the stadium, with a squad that is evolving and will be rejuvenated this summer.

And let’s not forget that he is one game away from completing a League and Champions League double.

When I was with them in Madrid on Tuesday, they seemed to have the composure of serial winners, the calm head of those used to being in big finals. Players walked into the biggest week of the season looking like they were walking the beach in flip flops. It is not arrogance. It is the feeling that, in a way, they have nothing to lose, but with confidence they have a good chance of winning.

Yes, they lack that extra dimension that a Galactic would give them in the commercial world.

But how much do they need one in the field itself? We could meet Liverpool on Saturday.